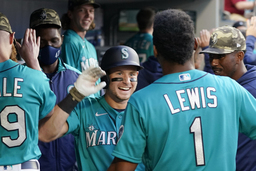 Seattle Mariners' Jarred Kelenic, center, is congratulated on his two-run home run against the Cleveland Indians in the third inning of a baseball game Friday, May 14, 2021, in Seattle. (AP Photo/Elaine Thompson) 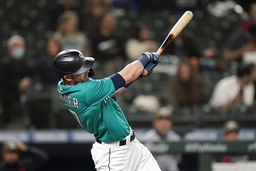 Seattle Mariners' Mitch Haniger hits a two-run home run against the Cleveland Indians during the seventh inning of a baseball game Friday, May 14, 2021, in Seattle. (AP Photo/Elaine Thompson) 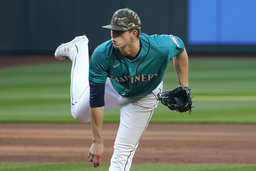 Seattle Mariners starting pitcher Chris Flexen follows through as he throws against the Cleveland Indians in the first inning of a baseball game Friday, May 14, 2021, in Seattle. (AP Photo/Elaine Thompson) 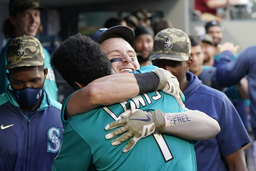 Seattle Mariners' Jarred Kelenic, center right, is embraced by Kyle Lewis (1) after hitting a two-run home run against the Cleveland Indians in the third inning of a baseball game Friday, May 14, 2021, in Seattle. (AP Photo/Elaine Thompson) 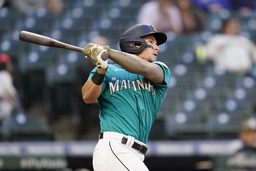 Seattle Mariners' Jarred Kelenic watches his two-run home run against the Cleveland Indians in the third inning of a baseball game Friday, May 14, 2021, in Seattle. (AP Photo/Elaine Thompson) 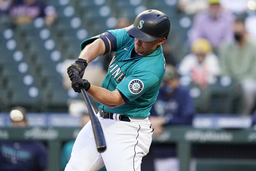 Seattle Mariners' Kyle Seager connects on a solo home run against the Cleveland Indians in the first inning of a baseball game Friday, May 14, 2021, in Seattle. (AP Photo/Elaine Thompson)

Same start in the majors.

Kelenic made his first career hit extra memorable with a two-run homer and later added a pair of doubles, leading the Mariners to a 7-3 win over the Cleveland Indians on Friday night.

After going hitless in his big league debut Thursday night, Kelenic brought the Seattle crowd to its feet with a long ball in the third inning. He stayed with an off-speed pitch from Aaron Civale, but still had the power to drive it 403 feet out to right-center field.

The ball was clocked at 109.3 mph off the bat and Kelenic's sprint around the bases seemed just as fast. He embraced fellow young Seattle star Kyle Lewis in the dugout with a bearhug and tipped his cap to the fans when their standing ovation didn't stop.

''I didn't even know that that's what they wanted, until people were like, `Get out there.' I didn't know what was going on until I realized that everyone was standing up,'' Kelenic said. ''But that's something I've always imagined.''

The 21-year-old Kelenic became the youngest Mariners player to homer since Adam Jones in 2006 and joined Lewis in hitting a home run for their first major league hits. Lewis did it in September 2019.

Kelenic also homered for his first hits at Class A Modesto in 2019 and with Triple-A Tacoma earlier this month.

''A lot to get excited about. Big night for him tonight and his family and our team quite frankly,'' Seattle manager Scott Servais said. ''It's loud in here, guys are excited, they know what he can bring and he's going to continue to have fun, that's for sure.''

Kelenic added a pair of hustling doubles in the fifth and seventh, the second scoring Sam Haggerty to give Seattle a 5-1 lead. Mitch Haniger followed with a two-run homer off reliever Phil Maton, his 11th of the season, to cap the four-run inning for Seattle.

Kyle Seager also homered in the first off Civale, his eighth of the season.

Civale (5-1) allowed a season-high five earned runs in 6 2/3 innings. He gave up seven hits and struck out six.

''He made a couple mistakes,'' Cleveland manager Terry Francona said. ''He threw Seager a cutter that caught way too much of the plate. ... (Kelenic) made some adjustments. I mean, tip your hat to him. He's a pretty strong kid and he got extension and did some damage.''

Seattle starter Chris Flexen allowed just one run in 5 2/3 innings and won his third straight decision. The only run Cleveland managed off Flexen (4-1) was Jordan Luplow's RBI single in the fifth.

Flexen permitted five hits and failed to record a strikeout for the second time in three starts. He is the first Seattle pitcher since Mike Leake in 2018 to win a start without a strikeout.

Josh Naylor hit a two-run homer in the ninth for Cleveland. Rafael Montero got the final out for his fifth save.

''I'm a competitor. I want to win. I want to bury our opponents, each and every night,'' Kelenic said. ''It really bugs me when I give away at-bats or if I don't execute on what I'm trying to do.''

Seager's first-inning drive was his 83rd career home run at T-Mobile Park, tying him with Nelson Cruz and Raul Ibanez for the most in the history of the 22-year-old stadium.

Indians: Eddie Rosario was hit on the left foot with the first pitch of the ninth inning by JT Chargois. Rosario was lifted for a pinch-runner.

Mariners: Placed two starters on the 10-day injured list as 1B Evan White (hip) and INF/DH Ty France will both be sidelined. White was hurt diving to field a grounder in Thursday's game, while France has been bothered by his left wrist for a little while. There was no timetable given for either player. The Mariners recalled INF Donnie Walton and INF Jack Mayfield from Triple-A Tacoma.

Mariners: LHP Justus Sheffield (2-3, 4.91) tries to rebound after getting knocked around for 10 hits and five earned runs in a loss to Texas last time out. In his previous start at home, Sheffield threw six shutout innings in a victory over the Angels.