Padres hold off Dodgers 3-2 in resumption of SoCal rivalry 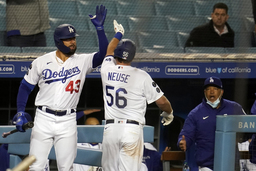 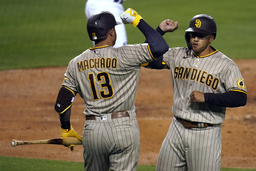 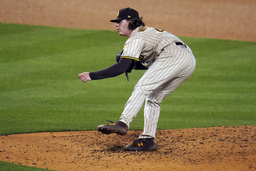 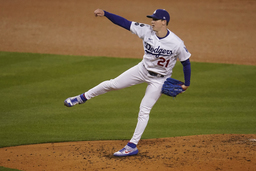 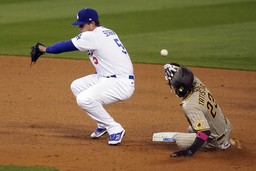 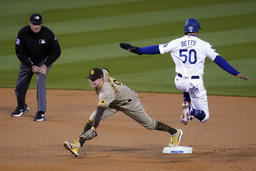 Los Angeles Dodgers' Mookie Betts (50) is forced out at second base by San Diego Padres second baseman Jake Cronenworth after a ground ball by Justin Turner during the first inning of a baseball game Thursday, April 22, 2021, in Los Angeles. (AP Photo/Marcio Jose Sanchez)

LOS ANGELES (AP) Jake Cronenworth barely managed to knock down Sheldon Neuse's vicious 105-mph grounder. He recovered and relayed to Fernando Tatis Jr., who somehow dragged his foot sideways over the bag while loading up for a desperate throw that beat Neuse to first by an eyelash.

Although it's only April, the San Diego Padres know their eighth-inning double play with the bases loaded to preserve a one-run lead in their 3-2 victory over the Los Angeles Dodgers on Thursday night will probably stand up as one of their biggest thrills of the season.

''To describe what the dugout was, it was electric,'' manager Jayce Tingler said. ''We've been a part of some big innings, or a big home run. That play defensively felt like a playoff home run in a critical moment with your life on the line.''

It's also just the latest superb moment in a rivalry series that's only getting more exciting.

Jurickson Profar singled and scored the tiebreaking run in the eighth inning as San Diego opened a four-game series at chilly Chavez Ravine by handing the Dodgers their first home loss of the season. Trent Grisham homered and had two hits for the Padres, who snapped a three-game skid.

Los Angeles took two of three in San Diego last weekend, but the Padres answered with timely hits, a strong start from rookie Ryan Weathers and that fantastic defense in the eighth, capping yet another well-played matchup between two stacked rosters.

''We're both really talented teams that know how to play good baseball,'' said Walker Buehler, who pitched seven innings of four-hit ball for the Dodgers. ''You've got to assume there's going to be a few nail-biters in there.''

AJ Pollock and Neuse hit back-to-back homers leading off the seventh for the major league-leading Dodgers, who have lost three of four after a 13-2 start to the season. With several key hitters injured, Los Angeles has scored just 10 runs in its last five games.

Manny Machado had an early RBI single for San Diego, but Neuse's first career homer tied it for Los Angeles.

Profar and Victor Caratini singled off Blake Treinen (1-1) leading off the eighth, and Profar put San Diego back ahead on Tatis' double-play groundout.

Profar just missed a diving catch on Will Smith's tailing fly down the left field line after a long run, putting two Dodgers in scoring position with nobody out in the eighth.

After Max Muncy grounded out and Pollock was intentionally walked to load the bases, San Diego turned its defining double play.

''It was a roller coaster inning,'' Dodgers manager Dave Roberts said. ''I thought we put ourselves in a position to at least tie the game, potentially go ahead. It took a great play by Cronenworth to recover on the ball and make that nice feed, and I just don't know many shortstops that can make that play with that arm speed.''

Both Dodgers were out by minuscule margins confirmed by video review, setting off a wild celebration in the Padres' dugout and clubhouse.

''I was doing arm care,'' Weathers said. ''We all screamed in the clubhouse. I wish I would have been out there for it.''

Nabil Crismatt (1-1) finished the seventh for San Diego, which was thin in the bullpen after using seven relievers Wednesday. Mark Melancon pitched a dominant ninth for his seventh save.

''All around, that was probably our best-played game so far,'' Tingler said. ''It was certainly well-needed.''

Buehler racked up a season-high nine strikeouts in his longest start of the season, but the Los Angeles ace was narrowly outpitched by Weathers, who hurled 5 2/3 innings of scoreless, two-hit ball in the 21-year-old's second major league start.

Weathers followed up his first career start last week against the Dodgers with an even more impressive effort, popping his fastball and slider while comfortably handling the champs' dangerous lineup yet again.

Overall this season, Weathers has yielded two hits and two walks with nine strikeouts to the Dodgers across 9 1/3 scoreless innings - and that number rises to 10 2/3 scoreless innings in his career against Los Angeles counting his relief appearance in last season's division series.

Dodgers: CF Chris Taylor and rookie 2B Zach McKinstry were late scratches from the Dodgers' starting lineup due to lower back stiffness. ... Cody Bellinger still isn't sure when he'll return from a hairline fracture in his left leg. He hasn't played since April 5, but he took batting practice on the field Thursday for the first time since the injury.

Clayton Kershaw (3-1, 2.19 ERA) faces Yu Darvish (1-1, 2.55) in a rematch of last Saturday's meeting at Petco Park. Kershaw has thrown 18 consecutive scoreless innings after blanking the Padres for six, while Darvish took the loss against his former teammates despite throwing seven innings of one-hit, one-run ball.