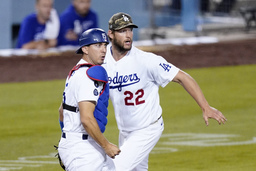 Los Angeles Dodgers catcher Austin Barnes, left, watches his throw to first along with starting pitcher Clayton Kershaw to get Miami Marlins' Adam Duvall out during the fifth inning of a baseball game Friday, May 14, 2021, in Los Angeles. (AP Photo/Mark J. Terrill) 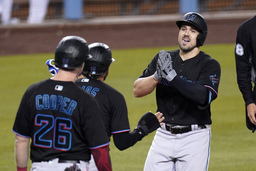 Miami Marlins' Adam Duvall, right, is congratulated by Miguel Rojas, center, and Garrett Cooper after hitting a three-run home run during the third inning of a baseball game against the Los Angeles Dodgers Friday, May 14, 2021, in Los Angeles. (AP Photo/Mark J. Terrill) 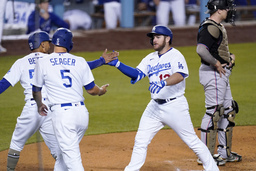 Los Angeles Dodgers' Max Muncy, second from right, is congratulated by Mookie Betts, left, and Corey Seager, second from left, after hitting a three-run home run as Miami Marlins catcher Chad Wallach stands at the plate during the second inning of a baseball game Friday, May 14, 2021, in Los Angeles. (AP Photo/Mark J. Terrill) 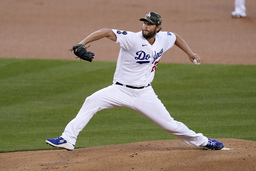 Los Angeles Dodgers starting pitcher Clayton Kershaw throws to the plate during the first inning of a baseball game against the Miami Marlins Friday, May 14, 2021, in Los Angeles. (AP Photo/Mark J. Terrill) 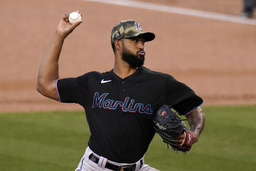 Miami Marlins starting pitcher Sandy Alcantara throws to the plate during the first inning of a baseball game against the Los Angeles Dodgers Friday, May 14, 2021, in Los Angeles. (AP Photo/Mark J. Terrill)

LOS ANGELES (AP) Clayton Kershaw went six innings and struck out 11 in a reasonably comfortable win for the Los Angeles Dodgers, and he was thoroughly disappointed in himself.

''Wasn't great today,'' the Dodgers' longtime ace said. ''Not a lot of positives. When your team gives you that much of a lead, you've got to do your best to not give up that many runs and save your bullpen as best you can.''

After fumbling and stumbling through the past 3 1/2 weeks, the Dodgers are emerging from their lengthy spring swoon and looking like defending champions again - raising both their play and their standards back to their usual heights.

Max Muncy hit a three-run homer during an eight-run second inning and Kershaw racked up a season high for strikeouts in Los Angeles' 9-6 victory over the Miami Marlins on Friday night.

Muncy homered in his third straight game, while Mookie Betts and Austin Barnes had RBI doubles for the Dodgers. They have won three straight and four of five after jumping to an early 8-0 lead and hanging on after the Marlins tagged Kershaw for five runs.

''I think we're just getting back to ourselves,'' Muncy said. ''I always say one of the things we do great is take it one game at a time. When the losses started piling up, we weren't doing that. We were thinking about games in the past. We were trying to look ahead. We weren't doing the things mentally that we're doing good now.''

Los Angeles lost 15 of 20 after its 13-2 start to the season, but the Dodgers have opened a nine-game homestand with their first three-game win streak in four weeks. All nine starters got a hit in the series opener against Miami.

Kershaw (6-3) won for the sixth time in eight starts despite matching his season high for earned runs allowed. He also contributed an RBI single and scored during the Dodgers' impressive second inning.

''We still have a good ballclub,'' manager Dave Roberts said. ''We had one a week ago, but we're just finding ways to win.''

Adam Duvall hit a three-run homer and Garrett Cooper drove in two runs for the Marlins, who have lost three straight and five of seven.

Miami's Sandy Alcantara (1-3) didn't get out of the second inning in the shortest start of his five-year major league career, yielding eight runs on seven hits and two walks while getting just four outs.

''Sandy came out and threw one of those games where everything just went wrong for him,'' Cooper said. ''To be down, you're not used to that with him for the last few years. It just speaks to the team we have for fighting back. You never give up in a situation like that.''

After Chris Taylor drew a leadoff walk in the second, the next six Dodgers delivered hits - including an RBI single by AJ Pollock, who then left the game after aggravating his tender left hamstring.

Miami halved the Dodgers' 8-0 lead in the third with Cooper's RBI single followed by a 417-foot shot from Duvall.

''That game could have been one of those that just got totally away,'' Miami manager Don Mattingly said. ''I was really happy with how the guys battled all day. One more big hit, and we're in that game. The bullpen did a nice job keeping it right there.''

The Marlins loaded the bases and scored one run with a two-out rally in the eighth, but Victor Gonzalez struck out Jon Berti to end the inning.

Kenley Jansen pitched a perfect ninth for his seventh save in nine opportunities.

Alcantara had lasted at least five innings in each of his first eight starts this season, but he has allowed 14 runs in only 6 1/3 innings in his two career starts at Dodger Stadium.

''Everything was working today, but I was just missing a little bit,'' Alcantara said.

Muncy's 424-foot homer was the fifth in eight games for the veteran slugger during a scorching stretch. He reached base for the 18th time in 36 plate appearances with a seventh-inning single.

Marlins: RHP Elieser Hernandez (biceps) will start a rehab assignment next week. He hasn't pitched for Miami since April 3. ... INF Jazz Chisholm Jr. (hamstring) homered in a minor league game. He should be back this weekend or shortly afterward.

Dodgers: Pollock likely is headed for the injured list, Roberts said. ... LHP David Price (hamstring) threw two simulated innings. He is close to returning. ... OF Cody Bellinger (hairline leg fracture) is running at 80% in Arizona, and he could go on a minor league rehab assignment next week. ... INF/OF Zach McKinstry (oblique) will go to Triple-A Oklahoma City on Sunday or Monday.