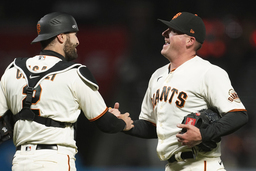 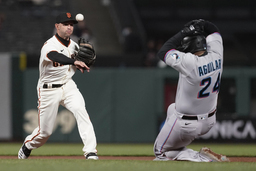 San Francisco Giants second baseman Tommy La Stella, left, throws to first base after forcing out Miami Marlins' Jesus Aguilar (24) at second base on a double play hit into by Adam Duvall during the seventh inning of a baseball game in San Francisco, Thursday, April 22, 2021. (AP Photo/Jeff Chiu) 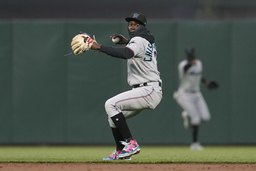 Miami Marlins second baseman Jazz Chisholm Jr. throws to first base for the out after fielding a grounder by San Francisco Giants' Mike Yastrzemski during the third inning of a baseball game in San Francisco, Thursday, April 22, 2021. (AP Photo/Jeff Chiu) 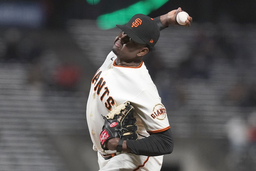 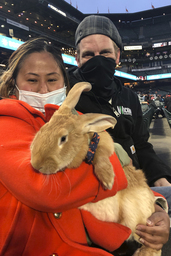 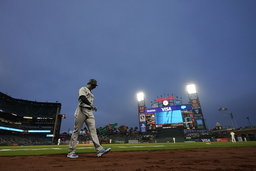 Miami Marlins' Adam Duvall walks to the dugout after striking out against the San Francisco Giants during the fourth inning of a baseball game in San Francisco, Thursday, April 22, 2021. (AP Photo/Jeff Chiu) 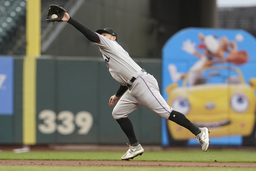 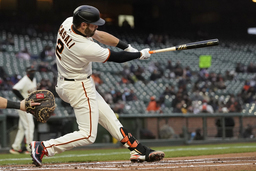 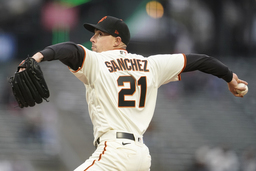 SAN FRANCISCO (AP) It means so much to Curt Casali that he can provide Buster Posey a much-needed break behind the plate and Giants pitchers don't miss a beat with the backup.

''Five in a row, it's pretty sweet,'' a grinning Casali said.

Casali - in for a resting Posey - is the fifth catcher since at least 1900 to backstop a shutout in five straight starts. He joins Francisco Cervelli (2015), Chris Hoiles (1995), Alan Ashby (1986) and Ed Phelps (six straight in 1903), per Elias Sports. Casali is the first to do it with five different starting pitchers.

The 32-year-old said the amount of pride he takes in that feat ''is probably more than I can describe.''

''Catchers are kind of like offensive linemen in baseball,'' said Casali, a former quarterback who has long marveled at O-linemen. ''Me and Buster have worked really, really hard behind the scenes. It feels like, finally, it comes to the forefront. I'm pretty proud. Obviously l'm not the one throwing the pitches.''

The Giants capitalized in the first with two outs against lefty Daniel Castano (0-1), when Darin Ruf hit an RBI double and Casali followed with a two-run single.

Sanchez (1-1) gave up two hits, struck out two and didn't walk a batter over five impressive innings for his first victory with the Giants, though he's not feeling his best physically yet following shoulder surgery in September 2019.

He was happy to have Casali backing his cause.

''Curt just gets it, man, I feel he's always just a step ahead of the game plan,'' Sanchez said.

Jake McGee, who like Sanchez is a new member of San Francisco's pitching staff this season, finished the two-hit shutout in 2 hours, 26 minutes, for his seventh save.

The Giants are 6-1 after losses, dropping back-to-back contests just once this season. They lost the series finale to the Phillies on Wednesday before their long trip home.

''We had chances to get back in the game and couldn't get anything going,'' Marlins manager Don Mattingly said.

Mattingly compares playing in San Francisco to the vibe of East Coast ballparks, with the electricity of the fans - and he missed not making this trip last year.

''The atmosphere here is really good,'' Mattingly said. ''Their fan base is energetic and rowdy. It's a fun place to play. It's closer to the East Coast than any of the West Coast cities that we play in, so San Francisco for me has always been a fun place to come to.''

Marlins: 3B Brian Anderson went on the 10-day injured list with a strained left oblique to give him an extended break to fully recover. ... 1B-OF Garrett Cooper (groin) sat out again. Mattingly said he will likely return Friday. ... RHP Jorge Guzman (elbow) had a setback in his rehab. ... RHP Elieser Hernandez (biceps inflammation) is throwing out to 90 feet while RHP Sixto Sanchez, who was delayed this spring, is throwing at 60 feet in Jupiter, Florida.

Giants: 3B Evan Longoria exited with a tight left hamstring and will be further evaluated Friday, manager Gabe Kapler said. ... 1B Brandon Belt had an MRI on his sore right quadriceps and sat out a second straight game. ... SS Brandon Crawford was able to pinch hit despite dealing with tightness in the upper part of his right rib cage that forced him out of the series finale at Philadelphia on Wednesday. ... INF Donovan Solano was placed on the 10-day injured list with a strained right calf, which was revealed from an MRI exam. ... RHP Gregory Santos was called up from the club's Sacramento alternate training site and pitched a scoreless inning in his major league debut, striking out two.

RHP Sandy Alcantara (0-1, 3.28 ERA) pitches Friday night for the Marlins opposite Giants LHP Alex Wood (1-0, 0.00), who beat Miami last week in his first outing since undergoing an ablation procedure in his lower back March 16.