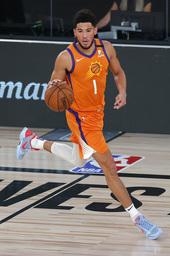 Phoenix Suns' Devin Booker dribbles the ball down court against the Indiana Pacers during the first half of an NBA basketball game Thursday, Aug. 6, 2020, in Lake Buena Vista, Fla. (Kevin C. Cox/Pool Photo via AP)