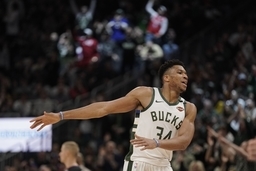 Milwaukee Bucks' Giannis Antetokounmpo reacts after making a three-point basket during the second half of an NBA basketball game against the Philadelphia 76ers Saturday, Feb. 22, 2020, in Milwaukee. The Bucks won 119-98. (AP Photo/Morry Gash)