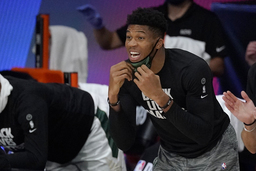 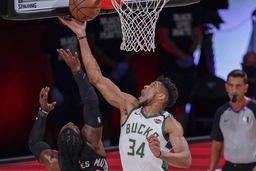 A person with knowledge of the situation says the Milwaukee forward is the NBA's Most Valuable Player for the second consecutive season. The person spoke to The Associated Press on condition of anonymity because the league is not announcing the award until Friday afternoon.

The 25-year-old Antetokounmpo becomes just the third player in league history to win MVP and Defensive Player of the Year in the same season, joining only Hall of Famers Michael Jordan and Hakeem Olajuwon.

Antetokounmpo's numbers this season were unprecedented, with averages of 29.5 points, 13.6 rebounds and 5.6 assists per game. Nobody had ever averaged those numbers over a full season; Wilt Chamberlain and Elgin Baylor both had seasons where they topped Antetokounmpo's averages for points and rebounds, though both fell just shy of matching his assist average.

And the numbers weren't inflated by big minutes, either. Antetokounmpo was fifth in the NBA in scoring, second in the league in rebounding - but only 71st in minutes per game. He led the Bucks to the NBA's best record this season, before Milwaukee was ousted from the playoffs by Miami in the Eastern Conference semifinals.

''Giannis, in our minds, has done more than enough to deserve back-to-back MVPs,'' Bucks coach Mike Budenholzer said when the team was in the NBA's restart bubble at Walt Disney World this summer. ''What he does for us on both ends of the floor, what he does every night, the way he sets the bar for us, culturewise, work ethicwise ... he's an incredible teammate, plays unselfishly, does everything. And I think that's kind of what the MVP is, so we certainly feel like he's very deserving.''

But only two players had pulled off the sweep, until now.

James and Houston's James Harden were the other MVP finalists this season. Antetokounmpo and James were the only players to be first-team All-NBA selections on all 100 ballots cast by the panel of global sports writers and broadcasters who cover the league.

Antetokounmpo also becomes the 14th player with multiple MVP awards and the second international player in that club, joining Canada's Steve Nash. This is the fifth time that someone won MVP honors while playing for the Bucks - only Boston, the Los Angeles Lakers, Philadelphia and Chicago have had more - and he's the 11th player to win back-to-back MVPs.

Miami Heat guard Goran Dragic (foot) was doubtful for Sunday's NBA Finals Game 6 against the Lakers, but intends to play and is listed as active. Playing with a plantar fascia tear seems like a bad idea, but Dragic reportedly has been told he won't reinjure himself by playing. Dragic won't be near 100 percent and will likely be on a minutes limit, so you shouldn't give him heavy consideration for your DFS lineups. Kendrick Nunn will likely see fewer minutes with Dragic playing, though there's also the possibility that Dragic tries to play and the pain is too much. It's a complicated situation in a must-win Game 6.

Miami Heat guard Goran Dragic (foot) is listed as doubtful for Sunday's Game 6 against the Los Angeles Lakers. Dragic has been listed as doubtful each game since suffering the injury in Game 1. It sounds like Dragic will test out his foot pregame, but it's highly unlikely that he suits up here. Tyler Herro and Kendrick Nunn will gain the most fantasy value from the absence of Dragic. Herro is the better option between the two.

Los Angeles Lakers center Anthony Davis (heel) is listed as probable for Sunday's Game 6 contest against the Miami Heat. However, Davis mentioned on Saturday that he'd be fine for Sunday's contest. He is fully expected to play through the issue and should see his normal workload. LeBron James (groin) and Danny Green (finger) are listed as probable as well, but are expected to take the court on Sunday. The Lakers are a little banged up, but will play through the pain.

Golden State Warriors center Kevon Looney is expected to have a bigger role on the team next season. Head coach Steve Kerr mentioned that Looney is looking at 20-25 minutes per game for the 2020-2021 campaign. That is a fairly significant increase, but won't make a huge impact on his fantasy value. Looney has been unable to stay healthy and isn't a great option in Golden State. He could have deep league value, but probably not worth a look in 12-team leagues on draft day.

Chicago Bulls forward Lauri Markkanen is hopeful that he can prove the doubters wrong next season. "My expectations are even higher than ever now, just going back to my fourth year and performing at a high level," said Markkanen. Former head coach Jim Boylen failed to get much out of his young core during his time in Chicago. It sounds like Markkanen is already hitting it off with new head coach Billy Donovan. Markkanen has plenty of talent and should have a significant role on the team going forward. Fantasy owners could look at Markkanen as a sleeper player for next season.

Phoenix Suns center Aron Baynes could be headed elsewhere this offseason. The veteran was non-committal when asked about his future with the team. I loved my time in Phoenix, Baynes said. I knew what it was coming in here and I was able to go out there and take advantage of the role that was given to me throughout a number of different situations." Baynes will hit free agency after posting career highs in multiple categories. He could very well land a significant role on another organization. His fantasy value will be dependent on where he signs in free agency.

Miami Heat guard Goran Dragic (foot) won't suit up for Tuesday's Game 4 matchup against the Los Angeles Lakers. He tried to get up some shots pregame, but it was too painful. It doesn't look good for Dragic's chances of playing in this series, but consider him questionable for Game 5. Tyler Herro is expected to join the starting five, while Kendrick Nunn gets more minutes as well. Herro is the better fantasy option between the two.

Miami Heat center Bam Adebayo (neck) is officially back in the starting five for Tuesday's Game 4 matchup against the Los Angeles Lakers. He has been sidelined since Game 1, so this is a big lift for Miami. It's unclear whether or not Adebayo will be limited, which makes him a risky DFS option. Kelly Olynyk will see his minutes and playing time decrease here. Meyers Leonard might fall out of the rotation completely.

Miami Heat center Bam Adebayo (neck) is planning to make his return for Game 4 of the 2020 NBA Finals against the Lakers on Tuesday night, according to sources. Adebayo missed the previous two games of the series due to a neck strain that he suffered in Game 1, forcing the 23-year-old to exit during the second half of the contest. Adebayo's potential return to the lineup will be encouraging news for the Heat, who may be forced to play without guard Goran Dragic (foot) for the remainder of the series as he is without a timetable for a potential return. Adebayo will serve as a solid DFS option for Tuesday's game if he ends up making his return.

Los Angeles Lakers guard Danny Green (hip) was limited during the Game 2 victory over the Miami Heat. He took a hard fall during the second quarter and appeared to have injured his hip. J.R. Smith saw a few minutes after Green checked out, but it doesn't sound like Green will miss time. However, Green was awful during Game 2, so fantasy owners should not expect a bounce back performance out of him.

Miami Heat center Bam Adebayo (neck) is listed as doubtful for Sunday's Game 3 against the Los Angeles Lakers. He was unable to play in Game 2 due to a neck sprain. Meyers Leonard drew the start, but only played nine minutes. Kelly Olynyk ended up benefiting the most by dropping 24 points in 37 minutes of play. He's looking like a solid DFS option, assuming Adebayo is sidelined again.

Miami Heat guard Goran Dragic (foot) is listed as doubtful for Sunday's Game 3 against the Los Angeles Lakers. He suffered a left plantar fascia tear and the Heat are not optimistic that Dragic will be able to suit up. Tyler Herro should remain in the starting five, while Kendrick Nunn will see more minutes coming his way. Both players could be interesting DFS options without Dragic on the court.

Miami Heat forward Jimmy Butler (ankle) will suit up for Game 2 against the Los Angeles Lakers on Friday. He sprained his left ankle during the first half of Game 1 on Wednesday. It was going to take a lot to keep Butler off the court for this game. Sadly, they will be without Goran Dragic (foot) and Bam Adebayo (neck) on Friday. Butler is going to be asked to do just about everything on offense for Miami.

Miami Heat center Bam Adebayo (neck) has been ruled out for Friday's Game 2 against the Los Angeles Lakers. This is a huge blow to the Heat who are already without Goran Dragic (foot) for this game. Kelly Olynyk, Derrick Jones, and Meyers Leonard are expected to see more playing time on Friday. Jae Crowder could see more action as well, but it'll be hard to fill the void left by Adebayo. None of these players are great DFS options. Jimmy Butler is going to be asked to carry the load on offense.

Miami Heat guard Goran Dragic (foot) has been ruled out for Friday's Game 2 against the Los Angeles Lakers. He is still dealing with a foot issue that he suffered during the first game of the series. Kendrick Nunn is expected to join the starting five, while Tyler Herro gets more minutes as well. Both sound like appealing DFS options with the Heat roster banged up.

Miami Heat guard Goran Dragic (foot) could be in danger of missing Game 2 versus the Los Angeles Lakers on Friday. The veteran guard suffered a torn plantar fascia during the first half of Wednesday's contest. The team is going to continue to evaluate Dragic before deciding what to do. It sounds like his status for Friday's game is doubtful, but we'll wait and see. Tyler Herro and Kendrick Nunn would see a boost in fantasy value, assuming Dragic is out.

Miami Heat center Bam Adebayo (shoulder) suffered an injury and was unable to return during Game 1 versus the Los Angeles Lakers. He was only able to play 21 minutes before suffering a left shoulder strain. The X-rays were negative, which is good news. However, the team might have Adebayo undergo an MRI as well. It's unclear if he'll be able to suit up for Game 2 on Friday. Kelly Olynyk and Meyers Leonard would likely gain significant fantasy value if Adebayo sits out.

Miami Heat forward Jimmy Butler (ankle) suffered an injury during the Game 1 matchup versus the Los Angeles Lakers. He sprained his left ankle during the first half of the game, but was able to play through the issue. Butler is currently listed as questionable for Game 2, but it would be shocking if he didn't play. There should be more updates on his status before the game on Friday. Fantasy owners should feel confident that Butler will be on the court for Game 2.

Boston Celtics forward Jayson Tatum is reportedly looking to sign a max contract extension this offseason. Celtics team president Danny Ainge said that the organization is confident that they will come to terms on a contract. The two sides won't be able to talk right away due to league rules, but Ainge believes they will be able to lock up Tatum. The All-Star forward appears happy in Boston, so the two sides should be able to come to an agreement. Tatum is basically a lock for the first round in every fantasy format.