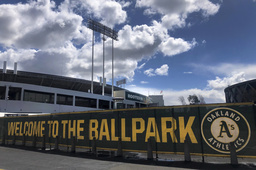 This March 25, 2020, file photo shows a banner to welcome to fans at the Oakland-Alameda County Coliseum in Oakland, Calif. The Athletics are placing their scouts and a significant number of other front office employees on furlough, suspending pay for minor leaguers and cutting the salaries of other executives as part of a cost-cutting move in response to the COVID-19 pandemic. A's owner John Fisher announced the moves Tuesday, May 26, 2020, in a rare public statement on what he called a "tremendously difficult day." (AP Photo/Ben Margot, File)