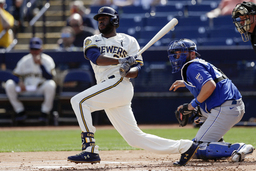 Milwaukee Brewers' Lorenzo Cain grounds out while batting during the first inning of a spring training baseball game against the Kansas City Royals, Thursday, Feb. 27, 2020, in Phoenix. (AP Photo/Gregory Bull)