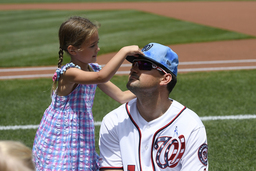 In this June 16, 2019, file photo, Washington Nationals' Ryan Zimmerman has his cap adjusted by his daughter Mackenzie before a baseball game against the Arizona Diamondbacks in Washington. With baseball on hold because of the coronavirus pandemic, Zimmerman occasionally will offer his thoughts via diary entries published by the AP, while waiting for the 2020 season to begin. (AP Photo/Nick Wass, File)