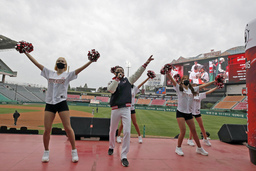 In this May 5, 2020, file photo, SK Wyverns' cheerleaders cheer for their team during a baseball game against Hanwha Eagles in Incheon, South Korea. Take a look across the globe and mascots remained a staple of baseball games in Taiwan and the KBO League in South Korea. The cheerleaders provide a soundtrack for an otherwise dreary atmosphere. (AP Photo/Lee Jin-man, File)