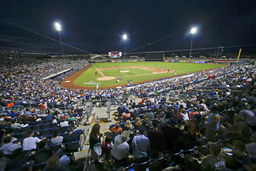 In this Thursday, March 12, 2015 file photo, Peoria Sports Complex Stadium host a spring training night baseball game between the San Diego Padres and Los Angeles Dodgers in Peoria, Ariz. Putting all 30 teams in the Phoenix area this season and playing in empty ballparks was among the ideas discussed Monday, April 6, 2020 during a call among five top officials from MLB and the players' association that was led by Commissioner Rob Manfred, people familiar with the discussion told The Associated Press. (AP Photo/Lenny Ignelzi, File)