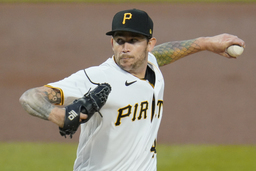 Pittsburgh Pirates starting pitcher Steven Brault delivers during the first inning of a baseball game against the Chicago Cubs in Pittsburgh, in this Tuesday, Sept. 22, 2020, file photo. Brault is done bouncing around. The Pittsburgh Pirates left-hander is a fixture in the starting rotation this season after spending years filling a variety of roles. (AP Photo/Gene J. Puskar, File)