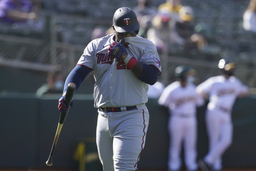 Minnesota Twins' Miguel Sano walks to the dugout after striking out against the Oakland Athletics during the fourth inning of the first baseball game of a doubleheader in Oakland, Calif., Tuesday, April 20, 2021. (AP Photo/Jeff Chiu)