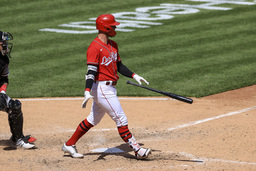 Cincinnati Reds' Jesse Winker throws his bat after hitting an RBI walk-off single during the tenth inning of a baseball game against the Chicago White Sox in Cincinnati, Wednesday, May 5, 2021. The Reds won 1-0. (AP Photo/Aaron Doster)