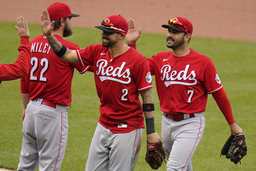 Cincinnati Reds' Eugenio Suarez (7) celebrates as he walks off the field with Nick Castellanos (2) after getting the final out of a baseball game against the Pittsburgh Pirates in Pittsburgh, Wednesday, May 12, 2021. The Reds won 5-1.(AP Photo/Gene J. Puskar)