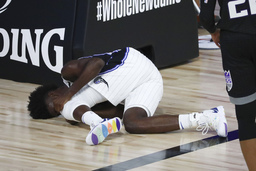 Orlando Magic forward Jonathan Isaac lies on the court after an injury during the second half of the team's NBA basketball game against the Sacramento Kings on Sunday, Aug. 2, 2020, in Lake Buena Vista, Fla. (Kim Klement/Pool Photo via AP)