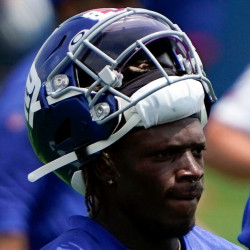 New York Giants wide receiver Kadarius Toney (knee) won't suit up for the preseason opener. The young wideout is currently dealing with a knee injury that has kept him out of practice. This doesn't sound like a serious injury, but the Giants are going to play it safe. Toney should be fine within a week, but fantasy managers should continue to monitor this situation. He could have some WR3 appeal, but it depends on if the Giants can actually get him the ball.

New York Giants wide receiver Kadarius Toney (knee) was held out of 11-on-11 work in training camp practice on Sunday for the third time in nine practices while coming off an offseason knee procedure. Toney probably has the highest fantasy ceiling of all of New York's receivers in just his second NFL season, but he was limited to just 10 games in his rookie season in 2021 due to knee issues, finishing with 39 receptions on 57 targets for 420 yards and no touchdowns. The 23-year-old's knee injury is something to keep a close eye on, but if he's healthy, he could make some real noise in new head coach Brian Daboll's offense. For now, fantasy managers should consider Toney a WR4/5 with upside in 2022.

New York Giants wide receiver Kadarius Toney is probably the best bet for fantasy production among the team's wideouts this year. Toney is young and explosive and has been on the field this summer after battling injuries in 2021. He was targeted on 29.8% of his routes run in his rookie season, the eighth-highest total in the NFL. Even though the Giants have a new coaching staff this year, the desire to get Toney the ball has not changed. Questions continue to surround Kenny Golladay and Sterling Shepard, which only gives Toney more value. Fantasy managers have avoided players on the Giants in recent seasons, but Toney is worth a late-round flier as a WR4/flex this year with quarterback Daniel Jones healthy.

New York Giants wide receiver Kadarius Toney was praised by head coach Brian Daboll after the second day of training camp. "He's a smart football player. You can tell that he has good instincts as a football player," said Daboll. Toney has been impressive during the first two days of camp and was the star of Day 1 after making a contested catch in the corner of the endzone. If Toney can stay healthy, he has a legitimate chance to be the No. 1 option in the passing game in the New York offense. However, that remains to be seen considering he suited up in just 10 games as a rookie after suffering a number of different injuries. He was able to show flashes of brilliance last season, including a performance of 10 catches for 189 yards. Now, in what should be a much-improved passing attack from 2021, the former Florida collegiate star is a potential breakout candidate heading into his sophomore season and could find himself in the FLEX discussion for fantasy managers early on.

New York Giants wide receiver Kadarius Toney (knee) was not placed on the Physically Unable to Perform list, meaning he will be a full go to start training camp. Toney underwent minor arthroscopic knee surgery in May and was a non-contact participant at OTAs this spring. The 23-year-old was hampered by injuries during his rookie season in 2021, limiting him to just 10 games on the year. He flashed some tantalizing potential during a game against the Dallas Cowboys in October when he racked up 189 yards, but he wasn't very effective in any other games last season. He's an intriguing fantasy sleeper this year who comes with immense upside but a high amount of risk.

Dynasty | Giants receivers, including sophomore Kadarius Toney, could benefit from an improved offense providing more freedom, movement and an expectation of big plays. Dynasty Analysis: New head coach Brian Daboll has brought an entirely new style to the offense and will feature "moving parts all day long" said receiver Sterling Shepard. Coming from Buffalo, which finished near the top of the league in yardage and points, Daboll has overhauled the offense to provide more freedom and give receivers "a lot of leeway to win" in the words of second-year player Kadarius Toney. If there's more movement, freedom and space available in the passing game, this would seem to benefit the dynamic Toney who figures to be a prominent fixture in three-receiver sets. There aren't many more difficult projections than the Giants in 2022 but if Daboll is able to transfer his offensive success from Buffalo to New York, Kadarius Toney, DLF's WR53, could be an intriguing dynasty sleeper.

New York Giants wide receiver Kadarius Toney (knee) hasn't been a full participant at recent OTAs. The 23-year-old was observed wearing the infamous no-contact red jersey, although it was later revealed he hasn't practiced because of minor arthroscopic knee surgery. Fortunately, the 2021 first-round pick should be ready to roll by training camp. Toney, who was rumored to be on the trade block a few months ago, has a chance of establishing himself as the team's top wideout this season. Yet, having Daniel Jones under center may make accumulating fantasy points a challenge, regardless of his place on the depth chart.

New York Giants offensive coordinator Mike Kafka said that wide receiver Kadarius Toney is "doing all the right things...on and off the field." Kafka also said Toney is being attentive in meetings and has been good to work with during offseason team activities this week. At the same time, Toney's workload has been dialed back a bit due to undisclosed reasons. The 23-year-old played in only 10 games in his rookie season last year due to injuries, so the Giants are probably just playing it safe with him early in the offseason. Toney has a lot of playmaking abilities, but there are a lot of mouths to feed in New York's passing attack if everyone is healthy. The former first-round pick will be a high-risk, high-reward fantasy selection after he had 39 catches for 420 yards and no touchdowns in his first NFL season.

New York Giants wide receiver Kadarius Toney may not be going anywhere after all. After rumblings of a potential trade, the 2021 first-round pick attended voluntary workouts. General manager Joe Schoen also recently praised the wideout during an interview with WFAN's Tiki and Tierney, stating, "K.T. has been great. He's got a really good skill set. I look forward to working with him." Toney finished last season by accumulating 39 catches for 420 yards, including a 10-catch, 189-yard effort against the Cowboys in Week 5. Undoubtedly, the 23-year-old has all the talent in the world. However, questions regarding his conduct and inability to remain healthy certainly put a cap on his potential. It also doesn't help that Daniel Jones is still labeled as the team's starting signal-caller.

New York Giants wide receiver Kadarius Toney is in attendance for Monday's voluntary workouts, according to a source. Toney wasn't present for the start of the team's voluntary offseason workouts last week, but with trade rumors swirling around him, he decided to show up for the start of this week. According to ESPN New York's Jordan Raanan, the Giants view Toney as a valuable asset and would want a significant return in a trade involving Toney. It makes the likelihood that the 23-year-old gets dealt unlikely at this time. He was a first-round pick last year and caught 39 passes for 420 yards and no touchdowns on 57 targets over 10 games while dealing with various injuries. Toney has plenty of upside if he stays healthy, though, and he can make a lot of noise after the catch.

New York Giants wide receiver Kadarius Toney is reportedly on the trade block. Toney, a 2021 first-round draft pick, hasn't lived up to expectations, finishing the 2021 season with only 39 catches for 420 yards across 10 games. He's battled numerous injuries and multiple COVID-19 positive tests during his short time in the league, and his poor conduct has unquestionably hindered his development. Nonetheless, Toney has plenty of talent, as displayed throughout his successful collegiate career. However, he has virtually no fantasy value at the moment, so managers in redraft formats should avoid him.

New York Giants wide receiver Kadarius Toney won't be attending the organization's minicamp. Fantasy managers shouldn't be worried about anything yet. This technically is a voluntary minicamp, so Toney is allowed to skip it. Although, it would be nice to see Toney get in extra reps in Brian Daboll's offense. The second-year receiver is expected to have a bigger role in the Giants offense in 2022.

New York Giants wide receiver Kenny Golladay was a massive bust last year in his first season as the team's No. 1 receiver, as he had just 521 yards and no touchdowns. Golladay, known for his skills on 50-50 balls and passes deep down the field, wasn't often used on third downs or downfield. New head coach Brian Daboll is attempting to figure out what Golladay and second-year receiver Kadarius Toney do best in order to maximize their output in 2022. Daboll is watching tape of Golladay's best days with the Lions and of Toney from his days at Florida. Golladay's fantasy stock is obviously way down, but if both he and quarterback Daniel Jones can stay healthy, he could have a nice bounce-back season under Daboll. Toney has intriguing ability as well, but he never could stay on the field long enough to make much of an impact in his rookie season.