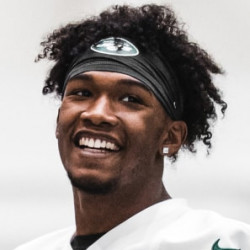 The New York Jets reached an agreement with first-round wide receiver Garrett Wilson on a four-year, fully guaranteed $20.55 million deal on Wednesday, according to a source. The Jets now have all three of their first-round picks under contract. Wilson went 10th overall to the Jets in this year's draft after recording 143 catches for 2,213 yards and 23 touchdowns in his time in Ohio State on 207 targets. The 21-year-old could struggle against more physical cornerbacks at the next level, but his athleticism and elite speed cannot be ignored. The Jets are hoping that Wilson can be a big-play threat immediately for second-year quarterback Zach Wilson. The rookie wideout has plenty of upside, but he could be inconsistent in his first NFL season while fighting for targets alongside Elijah Moore, Corey Davis and Braxton Berrios.

The New York Jets selected Florida State defensive end Jermaine Johnson II with the No. 26 overall pick in the 2022 NFL draft on Thursday. The Jets traded picks No. 35, 69 and 163 to the Tennessee Titans in order to bring in Johnson. The Titans gave them picks No. 26 and 101 in exchange. Johnson was a late riser up draft boards leading up to Thursday's first round, and some people thought he might even sneak into the top five. The Jets have had a really good first round of the draft, taking cornerback Sauce Gardner at No. 4 and wide receiver Garrett Wilson at No. 10. Johnson is scary athletic at 6-foot-5, 254 pounds, as evidenced by his 4.58-second 40-yard dash. The 23-year-old should be a candidate to start right away for Gang Green and could wind up being a steal.

The New York Jets selected Ohio State wide receiver Garrett Wilson with the No. 10 overall pick of the 2022 NFL draft on Thursday night. The Jets had been rumored to be trying to trade for San Francisco 49ers wide receiver Deebo Samuel leading up to the draft, but instead they'll take Wilson with their second first-round pick. Wilson is extremely athletic and brings a complete package at his position. He is a solid route-runner and has great body control with impressive speed. Everything seems to look easy for Wilson on the football team, and he should pair nicely with Corey Davis and Elijah Moore, who had an excellent rookie season last year. Quarterback Zach Wilson suddenly has some nice pass-catchers at his disposal. There's a lot to like about Garrett Wilson, but fantasy managers shouldn't reach for him in redraft leagues.

NFL analyst Jordan Schultz did some polling on Ohio State wide receiver Garrett Wilson. He inquired three general managers, a head coach and a director of scouting. All five of them believed Wilson has superstar abilities, particularly praising his YAC potential and his ability to snag 50/50 balls. Wilson projects to be one of the first receivers off the board on Thursday. He could be a target of the New York Jets at No. 10 or we could see him land with the Washington Commanders or Philadelphia Eagles slightly later.