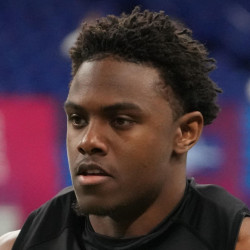 Washington Commanders wide receivers coach Drew Terrell said that he could not find any negative plays on rookie wide receiver Jahan Dotson's college game film. The 16th overall pick in the draft stood out in both organized team activities and mandatory minicamp due to his refined skills and renowned hands. "He's a smooth cat," Terrell said. "He's what we expected him to be thus far in terms of his being a route-runner, his ball skills, his demeanor, not flinching from the moment and being able to come out here and gain confidence every day and execute every day." Dotson has developed instant chemistry with quarterback Carson Wentz as well, but fantasy managers need to keep in mind this has all been without pads and with top wideout Terry McLaurin holding out. The first-rounder's stock is certainly rising, but he should still only be a late-round upside pick in standard-sized leagues.

Washington Commanders rookie wide receiver Jahan Dotson has been electric this offseason as one of the team's best offensive players, specifically his route-running and hands. "He's awesome," quarterback Wentz said. "He's a quiet kid, young kid, but he's a hard worker. He's smart, he's instinctual. He catches the football as natural as anybody I've been around, just how natural he plucks it out of the air." Dotson was one of Wentz's favorite targets during OTAs and minicamp, but remember that No. 1 receiver Terry McLaurin has been holding out as he seeks a long-term contract extension. The 22-year-old is certainly gaining steam in rookie-only dynasty/keeper leagues, and he might even be worth a flier as a WR5/6 in deeper single-year drafts.

Washington Commanders quarterback Carson Wentz has made it clear in offseason practices that he loves targeting rookie wide receiver Jahan Dotson. Dotson is consistently getting open for his quarterback during organized team activities and is developing some nice chemistry with Wentz early on. Fantasy managers should take this with a grain of salt, as teams aren't even in pads yet, but it's something to take note of as we get closer to training camp. The 22-year-old first-rounder should have a decent-sized role behind No. 1 wideout Terry McLaurin in his rookie season for the Commanders. McLaurin hasn't been taking part in offseason workouts either, so it has given Dotson more opportunities to build chemistry with Wentz.

The Washington Commanders signed first-round wide receiver Jahan Dotson to a four-year, fully guaranteed $15.05 million rookie deal on Wednesday. The deal comes with a fifth-year team option. Dotson was taken with the 16th overall pick of this year's draft and is expected to start opposite Terry McLaurin on the outside in D.C. immediately. The 22-year-old had 183 catches for 2,757 yards and 25 touchdowns in his collegiate career at Penn State. The 5-foot-11, 178-pounder could struggle with physical cornerbacks, but he has enough speed to create separation down the field for new quarterback Carson Wentz. Dotson won't be as attractive as some of the other rookie receivers in dynasty and redraft leagues, but mainly because Wentz has been so inconsistent.

The Washington Commanders selected Penn State wide receiver Jahan Dotson 16th overall in the NFL draft. According to Dotson, this was earlier than he and his draft prep team thought he would go. Speaking to the media after the selection, Dotson stated, "We were kind of thinking later first (or) early second." However, he also added, "I'm just happy that I got picked by the Washington Commanders and (I'm) ready to get to work." Dotson is a 5'11" speedster who racked up 1,182 yards and 12 touchdowns as a senior in 2021. He'll give the Commanders a much-needed play-making presence to complement No. 1 receiver Terry McLaurin.