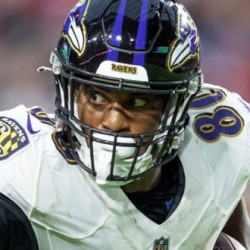 Baltimore Ravens fourth-round rookie tight end Isaiah Likely has impressed this offseason with his ability to get open and his large catch radius. "Watch out for this guy," safety Tony Jefferson said. "He's going to be really good." Likely caught several touchdown passes during red-zone drills as the star of the final day of mandatory minicamp. Quarterback Lamar Jackson said "the sky's the limit" for Likely. The 22-year-old from Coastal Carolina was extremely productive in college, and he finished 2021 with 59 catches for 912 yards and 12 touchdowns, but he's a little small and slow at his position by NFL standards. Mark Andrews is the clear No. 1 pass-catching tight end for Baltimore, but Likely is one to keep an eye on as he competes with Josh Oliver and fellow rookie Charlie Kolar this summer.

Coastal Carolina tight end Isaiah Likely is taking a top-30 visit with the Buffalo Bills on Thursday, according to a source. Likely recently spent time with the New York Jets and will visit with the Arizona Cardinals next week. Sports Illustrated has reported that he has met with or worked out for 15 different NFL teams with the draft quickly approaching this month. The 6-foot-4, 240-pounder is a quick-moving slot receiver that could have plenty of fantasy upside at the next level, depending on where he lands. The 21-year-old finished his senior season in college with 59 receptions for 912 receiving yards and 12 touchdowns in 13 games for the Chanticleers.