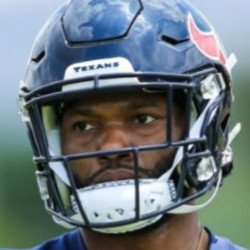 Houston Texans second-year wide receiver Nico Collins is the "clear No. 2" option on the depth chart, according to DJ Bien-Aime of ESPN. Injuries and quarterback turnover limited Collins to just 33 catches, 446 yards, and one touchdown as a rookie, but all signs point to him taking a big step forward in 2022. He'll start alongside reliable veteran Brandin Cooks in an offense that should look better this year than it did in 2021. Most notably, quarterback Davis Mills has a year of NFL experience under his belt and isn't facing as much competition in training camp. Collins' ADP of 145 makes him worthy of being selected as a late-round flier. He should see significant volume this year.

Houston Texans wide receiver Nico Collins was taken 89th overall last year and is showing he may have been worth an even higher pick than that. Collins, much like the rest of the offense, struggled during the early part of the season in 2021 but finished stronger, producing 31 receptions for 407 yards and one touchdown in his final 12 games. Collins has been making highlight-reel catches in camp, prompting head coach Lovie Smith to say, "Nico Collins is an excellent football player. We expect him to make plays like that." While veteran receiver Brandin Cooks will certainly lead the charge in this offense, Collins is not far behind. He is primed to take on a big role in an improved offense, making him an ideal draft target as a low-cost option who will offer weekly production for your team.

Houston Texans quarterback Davis Mills pointed to second-year wide receiver Nico Collins as a player who stood out this spring. Mills said Collins has a "good grasp of this offense" and "his talent is off the charts." Mills also said that the team needs to "find ways to get (Collins) the ball" this year. The 23-year-old wideout has looked stronger this offseason after hauling in 33 of his 60 targets for 446 yards and one touchdown in 14 games in his rookie campaign. Collins appears to have also improved his chemistry with Mills, which is extremely important. Along with veteran Brandin Cooks, who is the Texans' unquestioned No. 1 receiver, Collins is poised to improve in his sophomore season in 2022.