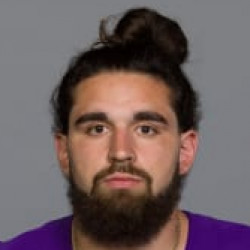 The New York Jets signed free-agent tight end Tyler Conklin to a three-year, $21 million deal this offseason. This coincided with a three-year, $24 million deal for fellow tight end C.J. Uzomah, creating some ambiguity at the position. While it's still early, it seems Conklin is leading the way. Head coach Robert Saleh said, "Conk is awesome. He's been fantastic for us." He further highlighted his three-down skill set, finishing by saying "he's been a pleasant surprise." While it's unknown at this point just how a big of a leap this offense will take, the lead tight end would slot in behind sophomore receiver Elijah Moore and rookie Garrett Wilson as the third option, providing sufficient production to be a weekly streamer with upside.

New York Jets tight end Tyler Conklin seized the majority of the repetitions at tight end during offseason practices because of the absences of C.J. Uzomah and Jeremy Ruckert. Conklin made the most of his extra work in the spring, and quarterback Zach Wilson is looking Conklin's way more often, especially in the red zone. Offensive coordinator Mike LaFleur will use all of his tight ends this year, but Conklin might be separating himself as the top option heading into training camp. The 26-year-old had a career-high 61 catches for 593 yards and three touchdowns in 17 games with the Minnesota Vikings last year and he can be a valuable red-zone weapon, but he'll likely have a low fantasy ceiling while sharing snaps with Uzomah and others.

Dynasty | It appears as though Jets tight end Tyler Conklin may be separating himself on the depth chart to be the starter come week one. Dynasty Analysis: Training camp has yet to start and it's a guess based upon the unavailability of C.J. Uzomah but it would be no surprise if Conklin factors heavily as a starter. Fresh off a 61/593/3 stat line while with the Vikings in 2021, Conklin has upside in 2022, his age 27 season if he can win the job outright. But newcomer C.J. Uzomah also had an upside 2021 campaign with a 49/493/5 line and is a "move" tight end possessing a similar skill set. Neither player carries much dynasty value with Conklin appearing as DLF's TE37 and Uzomah unranked. Both figure to possess late round sleeper value until one emerges as the starter.

Ohio State tight end Jeremy Ruckert was selected by the Jets with the 101st overall pick in the 2022 NFL Draft. New York secured another tight end on Friday night after recently adding C.J. Uzomah and Tyler Conklin to the roster via free agency. Ruckert wasn't the most consistent receiving option throughout his time as a Buckeye. Yet, the-21-year-old was an effective pass-catcher when needed, especially inside the red zone. Nonetheless, competition for targets and uncertainty surrounding his role won't do him any favors on the fantasy end of things during his rookie season. As a result, Ruckert isn't anticipated to garner much interest from managers during drafts heading toward September. However, there's a chance he could get some attention as a streaming option during the year.

The New York Jets signed free-agent tight end Tyler Conklin to an undisclosed deal on Wednesday, according to sources. The Jets have added both Conklin and former Cincinnati Bengals tight end C.J. Uzomah this offseason. Uzomah had 49 catches for 493 yards and five touchdowns in 16 regular season games in 2021 and he'll be the Jets top pass-catching tight end in 2022, but fantasy managers shouldn't automatically expect him to match or top his numbers from a season ago in a much less explosive offense. Conklin broke out with a 61-593-3 line on 87 targets in 17 games last year with Irv Smith missing the entire year due to injury. Unless Uzomah misses time with an injury, Conklin won't be on the fantasy map.

Minnesota Vikings impending free-agent tight end Tyler Conklin said he "would love" to re-sign with the team for the 2022 season. Conklin had a career-high 61 catches for 593 yards and three touchdowns in 2021, and it helped that Irv Smith didn't play all year due to injury. His best path to fantasy relevance again this year would likely come with another team. The 26-year-old had a combined 32 receptions on 43 targets for 329 yards and one touchdown in the three seasons prior to 2021. The good news for Conklin is that three tight ends were handed the franchise tag, so he could generate plenty of interest on the open market from tight end-needy teams. If Conklin returns to Minnesota, his upside will be severely limited by the presence of Smith.