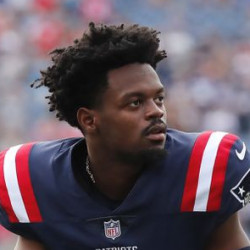 Dynasty | Tyquan Thornton had two catches for nine yards and a touchdown in the New England preseason opener. Dynasty Analysis: Despite being a second round pick in the NFL Draft this off-season, Thornton has been largely ignored by the dynasty community and is currently our 25th ranked rookie. While still a shocking selection, a few more touchdowns this preseason will make Thornton a fast riser in the dynasty community. At this point, he looks like a third round pick, but he clearly looked good in his debut.

Dynasty | Patriots wide receiver Tre Nixon was chosen by ESPN's NFL Nation as their surprise off-season standout. Dynasty Analysis: Nixon was a seventh round pick of New England last year and most of the past-catching attention in dynasty leagues has been on their surprise second round pick from this year, Tyquan Thornton. However, Nixon made some waves in off-season workouts and seemingly has a legitimate shot at making the Patriots roster and avoiding another trip to the practice squad. Nixon is a name to file away on watch lists.

New England Patriots wide receiver Tyquan Thornton has been mixing in with the starters during minicamp. The Patriots selected Thornton with the 50th overall pick in the draft. It was received as a reach and an unpopular pick, but the Patriots are giving Thornton a fair chance this summer. He finished with 62 receptions, 948 receiving yards, and 10 touchdowns during his final season at Baylor. It's also worth noting that the Patriots don't have a ton of talent at wide receiver. They brought in DeVante Parker and have Jakobi Meyers in the slot. After that, Nelson Agholor and Kendrick Bourne are the next two options. It wouldn't be shocking to see Thornton getting significant snaps early in the season. He's worth thinking about in the late rounds on draft day, assuming he continues to impress New England.

New England grabbed Baylor wide receiver Tyquan Thornton with the 50th overall pick in the 2022 NFL Draft. Green Bay reportedly also had its eye on the wideout. However, it was the Patriots making the relatively surprising move to pick up a receiver. Thornton, who had the fastest 40-yard dash time at his position during the combine, likely won't be a week-to-week fantasy option, primarily with DeVante Parker, Jakobi Meyers, Kendrick Bourne, and potentially N'Keal Harry on the depth chart. Yet, his speed makes him capable of making a sporadic splash throughout the 2022-23 campaign, especially if he's featured on special teams or there is an injury somewhere in the Pats' receiving corps.