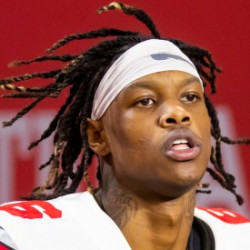 Detroit Lions wide receiver Jameson Williams (knee) has been placed on the non-football injury list. The No. 12 overall pick of the 2022 NFL Draft tore his ACL during the national championship game in January, requiring surgery. The organization has acknowledged the challenge of getting the rookie on the field for meaningful work this season, so he likely won't do much for redraft managers, especially since his debut is up in the air currently. However, the Alabama alum is worthy of a spot in dynasty formats for those who can afford to be without him.

Dynasty | The Lions are considering having Jameson Williams play on special teams. Dynasty Analysis: Having Williams return punts or kicks would increase his fantasy value, though many teams won't use their premier players in those kinds of dangerous situations. This will be an interesting tidbit to follow over the next few months as the Lions seem committed to at least getting the ball in his hands when he's fully healthy. Williams comes in as our 6th ranked rookie for 2022.

Detroit Lions head coach Dan Campbell doesn't think rookie first-round wide receiver Jameson Williams (knee) will be ready for the start of training camp at the end of July. "I don't see him being ready for training camp. I'm very hopeful, but I don't see it," Campbell said. Williams is missing extremely valuable repetitions at offseason practices after tearing his ACL in the National Championship game in January, and it will likely take him a while to get up to speed in Detroit's offense in his first NFL season whenever he finally takes the field. Don't be surprised if the 21-year-old doesn't make his NFL debut right away either. Williams has a high ceiling as a pass-catcher, but he could struggle to produce consistently in his rookie season as he recovers from his knee injury.

Detroit Lions rookie first-round wide receiver Jameson Williams (knee) is at the team's mandatory minicamp this week but isn't practicing as he recovers from a torn ACL suffered in January. Williams and the Lions are hoping that he can get to work at some point in training camp next month, but it's not a given. The Lions are going to take things extremely slow with the 21-year-old, so it wouldn't be a huge surprise if he wasn't ready to go for the start of the regular season. Williams will be missing valuable repetitions this offseason, and the Lions coaching staff has already expressed some concerns about getting Williams comfortable in the offense right away. Fantasy managers in single-year leagues should temper expectations.

Detroit Lions offensive coordinator Ben Johnson said it could be quite tricky to get rookie wide receiver Jameson Williams (knee) to fit into their offense right away. Josh Reynolds came to the team and immediately had an impact given his prior chemistry with quarterback Jared Goff from their time with the Los Angeles Rams. Williams was one of the top receivers in this year's draft, but he hasn't been practicing with the team as he recovers from a torn ACL he suffered in January. The Lions are taking things slowly with Williams' rehab, and there's a chance he begins the year on the Physically Unable to Perform list, which would cause him to miss at least the first six games. "That's a real struggle for us is to get him back, to get him healthy, and then (get him) as many reps as possible with the quarterbacks so that we know exactly where he's going to be, we can anticipate the throw," Johnson said.

Detroit Lions rookie wide receiver Jameson Williams (knee) thinks he can be ready by training camp in August, which would be an aggressive timetable for a return after he tore his ACL in the National Championship game on Jan. 11. Typically, ACL repair recovery takes nine to 12 months. Week 1 against the Philadelphia Eagles on Sept. 11 would be exactly eight months from the injury. If the first-rounder take part in training camp at all, he could make his NFL debut in the first month of the season. If he misses camp, Lions beat writer Tim Twentyman doesn't think we'll see Williams until late September or early October. The 21-year-old has been making good progress and has a ton of long-term potential, but those in redraft leagues should temper their expectations in Year 1.

The Detroit Lions and first-round wide receiver Jameson Williams agreed to a four-year, fully guaranteed rookie deal on Thursday, according to a source. The deal includes a fifth-year team option. The Lions have now locked up both of their first-round selections in Williams and defensive end Aidan Hutchinson, who was the second overall pick. Detroit took Williams at No. 12 overall, and although there are questions about whether he'll be ready for the season due to an ACL tear suffered in the National Championship game, Williams has perhaps the most upside of any rookie receiver. The 21-year-old could get off to a slow start in his first season if he's delayed, which makes him much more attractive in dynasty leagues in drafts this fall.

Detroit Lions wide receiver Jameson Williams (knee) is expected to be ready by training camp. He tore his ACL in the National Championship game and continues to progress in his recovery. The No. 12 pick in the NFL Draft can make huge plays after the catch and is expected to be quarterback Jared Goff's top target in 2022 once he takes the field. The 21-year-old hauled in 118 targets into 79 receptions for 1,572 yards and 15 touchdowns for Alabama in 2021. Williams and Amon-Ra St. Brown will give the Lions quite the dynamic duo at wide receiver in 2022.

The Detroit Lions traded up with the Minnesota Vikings from the last pick in the first round of the 2022 draft to the No. 12 pick to take Alabama wide receiver Jameson Williams on Thursday night. The run on top receivers in this year's draft continues. The Lions make a big splash with this one with a pass-catcher that could really become one of the best playmakers because of his elite speed. Williams tore his ACL in the National Championship game and could begin the regular season on the Physically Unable to Perform list, so his rookie season might not be fantasy relevant. He has the ability to make huge plays after the catch and has often been compared to Miami Dolphins wideout Tyreek Hill. Williams is going to be pretty expensive in dynasty leagues, but you might have to be patient as he recovers from his knee injury.

The Green Bay Packers, who hold picks No. 22 and 28, are another team exploring a move up within the first round of the NFL draft on Thursday. After trading All-Pro wide receiver Davante Adams to the Las Vegas Raiders this offseason, the Packers may need to move up within the first round on Thursday night to land their receiver of choice. Along with the Packers, the Philadelphia Eagles, Baltimore Ravens and potentially the Pittsburgh Steelers could be other teams to watch for in regards to trading up in the first round. If the Packers want to land one of the draft's top wideouts -- Drake London, Garrett Wilson or Jameson Williams -- they'll most likely have to move up on Thursday evening.

NBC Sports Boston's Albert Breer said that every team he's asked thinks Alabama wide receiver Jameson Williams (knee) will begin his rookie season on the Physically Unable to Perform list. If that indeed happens, Williams wouldn't be able to make his NFL debut until late October of the 2022 season. Despite the fact that Williams tore his ACL in the National Championship in January, he's still in play to be the first receiver off the board in the first round of the draft on Thursday night. When healthy, he has the ability to be the most athletic and dynamic receiver in this year's draft class, but Williams may not amount to much in redraft fantasy leagues, especially if he sits out half of his rookie season.

Alabama wide receiver Jameson Williams' (knee) agent tweeted a video of his client working out on Sunday in his recovery from an ACL tear suffered in January in the National Championship Game. NFL teams don't appear to be too worried about Williams' journey back from his knee injury after not experiencing any complications or setbacks, according to NFL Network's Ian Rapoport. "I don't know if he's going to be the first receiver taken, but he is going to be taken very high. I would not be surprised if he is a top-15 pick, ACL or not," Rapoport said. Williams is a big-play wideout that has the ability to be versatile at the next level, so don't expect him to slide into the second round this week.

Alabama wide receiver Jameson Williams is considered the best receiver in this year's draft by a wide margin, according to an anonymous wide receivers coach. "To me, it's not close. There's a big drop after him. He's blazing fast and you can't replicate that top-end, and his play speed is different like Tyreek Hill different he's running away from SEC guys. His explosiveness after the catch is rare. His quickness at the line of scrimmage is just different. He's a hands catcher not a body catcher. I think he's a good catcher, not a great catcher," the coach said. After tearing his left ACL in January, Williams has made good progress in his rehab and is hoping to be recovered by training camp. Depending on where he lands, Williams could have plenty of fantasy value in his rookie season.

Alabama wide receiver Jameson Williams (knee), who is two months removed from surgery to fix a torn ACL, is not taking part in his school's Pro Day on Wednesday. However, he continues to make progress in his rehab and is expected to resume running by the draft. Williams said in February at the scouting combine that he hoped to be ready to do some stuff in training camp this summer. The 21-year-old pass-catcher had a whopping 79 receptions for 1,572 yards and 15 touchdowns in 15 games in his junior year at Alabama after transferring from Ohio State. If NFL teams are confident enough in his rehab, there's still a chance they could take a chance on his upside in the first round next month.

Alabama standout wide receiver Jameson Williams (knee) is said to be ahead of schedule in his rehab roughly six weeks after he underwent knee surgery, according to his doctors. Barring any setbacks in his recovery, Williams is hoping to get repetitions in training camp this summer. The 20-year-old tore his ACL on Jan. 11, but he's already progressed to rehab work in a pool. Because of the injury, Williams is obviously skipping testing at the NFL scouting combine this week and at Alabama's Pro Day. Still, because of his elite skills catching the football, there's a chance that a team takes a shot on him in the first round of this year's draft if they're comfortable with his progress in his rehab from knee surgery.