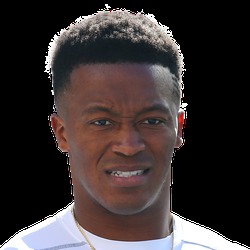 The New York Jets are still talking to free-agent wide receiver Demaryius Thomas. The 32-year-old former Denver Bronco doesn't have much left in the tank at this point in his career, catching only 36 passes (58 targets) for 433 yards and one touchdown in his 11 games for the Jets last year. It's a far cry from when he compiled five straight 1,000-yard campaigns from 2012 to 2016 with the Broncos. New York's receiving corps isn't all that strong with Breshad Perriman, Jamison Crowder and rookie Denzel Mims as the top three wideouts, but DT would likely battle for the fourth-receiver gig with the likes of Josh Doctson and Vyncint Smith. Thomas won't be relevant in New York unless injuries open up a more prominent role for him.

Fantasy Spin: Thomas was limited to 11 games this past season and finished with only 433 yards and one touchdown. He may be able to find a new team this offseason but probably can be avoided in fantasy leagues.