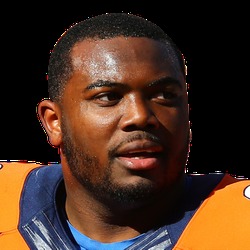 Updating a previous report, free-agent RBs C.J. Anderson (Lions) and Robert Turbin (Colts) will be among the players the Seattle Seahawks consider in addition to Marshawn Lynch to fill in for the injured Chris Carson (hip) and C.J. Prosise (arm).

The Detroit Lions released running back C.J. Anderson on Tuesday and claimed running back Paul Perkins off waivers from the Giants in a corresponding move. If anything, this is good news for Kerryon Johnson, who lost five carries to Anderson, five to rookie Ty Johnson and two to J.D. McKissic in the Week 2 win over the Chargers. It doesn't mean that Detroit won't still include Ty Johnson and McKissic moving forward, though, and Kerryon Johnson will be more of a low-end RB2 on Sunday against a tough Eagles defensive front. Ty Johnson's outlook in dynasty and deep leagues just got a lot better as the No. 2.

Detroit Lions RB C.J. Anderson was released Tuesday, Sept. 17. Free-agent RB Paul Perkins (Giants) was signed to an undisclosed contract to replace him on the roster.

Detroit Lions running back C.J. Anderson will likely see around 10 touches in Week 1 against the Arizona Cardinals. From a fantasy perspective, 10 touches is just not enough and he will only be valuable if he scores a touchdown, which is not very likely. Anderson will back up Kerryon Johnson all season as long as Johnson remains healthy; if Johnson does happen to get injured, Anderson will become an interesting option.