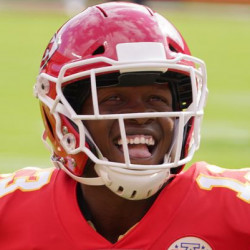 Kansas City Chiefs wide receiver Byron Pringle had a huge Week 5 performance where he caught six passes for 103 yards and a touchdown. He saw eight targets during his huge Week 5 game, but then he was targeted just three times during the Week 6 loss to the Texans. It seems like that performance might have just been a fluke. Tyreek Hill, Mecole Hardman, and Demarcus Robinson are all above Pringle on the depth chart. It's unlikely Pringle will get more than two or three targets with all those receivers healthy. He could be a desperation flex in deep leagues, but most fantasy owners should bench or drop Pringle. Most fantasy owners shouldn't bother with Pringle for the Week 7 matchup versus the Denver Broncos.

Kansas City Chiefs wide receiver Byron Pringle had a huge 103 yard performance last week, but was unable to do it again in Week 6. Pringle caught two of his three targets for 24 yards in the loss to the Houston Texans. Tyreek Hill (shoulder) returning basically killed all of Pringle's fantasy value. Hill, Sammy Watkins (when healthy), and Mecole Hardman are all ahead of Pringle on the depth chart. It'll be difficult for Pringle to hold fantasy value on a weekly basis. He'll be a drop candidate in most formats for next week. The Chiefs take on the Denver Broncos on Thursday in Week 7.

Kansas City Chiefs wide receiver Byron Pringle caught six passes for 103 yards and a touchdown in the loss to the Colts in Week 5. Pringle had two receptions heading into last week, but could have value again versus the Houston Texans in Week 6. Tyreek Hill (shoulder) is questionable to play after missing the last month. Sammy Watkins (hamstring) is doubtful to suit up after missing practice all week. Mecole Hardman, Demarcus Robinson, and Pringle would be the main options without them. Both Hardman and Robinson would likely see a bulk of the targets, but Pringle could be a desperation flex option against the Texans.

Chiefs' WR Byron Pringle had 6 receptions for 103 yards with one touchdown in Sunday's loss against the Colts.

Kansas City Chiefs wide receiver Byron Pringle was forced into more playing time after Sammy Watkins (hamstring) went down during the first drive. Watkins did not return to action and Pringle made sure to make the most of his extra snaps. Pringle caught six of his nine targets for 103 yards and a touchdown in the loss to the Colts in Week 5. Tyreek Hill (shoulder) is expected to play next week versus the Houston Texans. Pringle could still be worth an add in some formats, assuming Watkins is sidelined for at least one game. Most owners might want to wait for an update on Watkins before adding Pringle.

Kansas City Chiefs wide receiver Byron Pringle has been fairly quiet through the first four games of the regular season. He has two receptions for 20 yards in the first four weeks, but that could change in Week 5. Star receiver Tyreek Hill (shoulder) remains out, and Sammy Watkins (shoulder, hamstring) is questionable versus the Colts. Mecole Hardman and Demarcus Robinson would be the two top receivers without Watkins available. Pringle would likely end up being the No. 3 option against the Colts on Sunday. Pringle would have deep league appeal or WR4/5 appeal without Watkins. However, Pringle basically won't have any value if Watkins plays, so fantasy owners will have to wait and see.