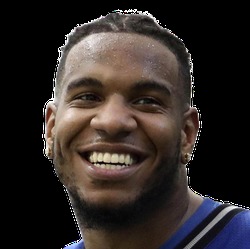 Pittsburgh Steelers TE Eric Ebron caught five passes for 52 yards and one touchdown against the Houston Texans in Week 3. He was targeted seven times during the game.

Fantasy Spin: Ebron was expected to be a red zone target when he signed with the Steelers and was able to win a jump ball for his touchdown. He should see a handful of targets each game but probably can be considered a No. 2 fantasy tight end in leagues.

Pittsburgh Steelers tight end Eric Ebron caught five of seven targets for 52 yards and a touchdown in a 28-21 win over the Houston Texans in Week 3. Ebron made an excellent catch on a 10-yard pass from Ben Roethlisberger in the right corner of the end zone for his first touchdown of the season. The big performance in Week 3 comes after two slow games to start off the year for Ebron. The veteran tight end now has nine catches for 113 yards and a touchdown through three games. He will remain a TE2 in Week 4 against the Tennessee Titans.

Pittsburgh Steelers tight end Eric Ebron is off to a slow start with his new team. Ebron has caught just four passes for 61 yards and has yet to find the end zone through two games. The veteran tight end has shown in past years that he has plenty of touchdown upside but it appears he's going to need to find the end zone to be useful in fantasy in 2020 as he's the fourth or fifth option at best in the Pittsburgh passing attack. Fantasy gamers should have a better starting option than Ebron in Week 3 as he's just a low-end TE2, even against a weak Houston Texans pass defense.

Pittsburgh Steelers tight end Eric Ebron caught three of his five targets for 43 yards in a 26-21 win over the Denver Broncos in Week 2. While it wasn't a dominant performance, it was much better than Ebron's debut with Pittsburgh last week where he caught just one pass for 18 yards. Fellow tight end Vance McDonald saw just two targets to Ebron's five, so at least he's starting to pull away in that respect. Fantasy gamers should stay patient with Ebron for at least a few more weeks as it is possible he starts to produce more as he gets more comfortable in the Pittsburgh offense. The Steelers face the Houston Texans in Week 3.

Pittsburgh Steelers tight end Eric Ebron had a disappointing debut with his new team, catching just one of two targets for 18 yards in a Week 1 win over the New York Giants. Ebron will hope for a larger role in the offense when he takes on the Denver Broncos at home in Week 2. While Denver allowed Jonnu Smith to find the end zone in Week 1, Ebron is best left on fantasy benches until he proves that he is going to be a trustworthy part of the passing attack. Treat him as a mid-range TE2 in Week 2.

Pittsburgh Steelers tight end Eric Ebron had a quiet debut with his new team in a 26-16 win over the New York Giants in Week 1. Ebron was targeted just twice, catching one pass for 18 yards in the win. He split looks with fellow tight end Vance McDonald, who also saw two targets from quarterback Ben Roethlisberger. The veteran tight end surely will have more productive days ahead of him but his lack of usage in the passing attack downgrades him to a low-end TE2 in fantasy going forward. The Steelers take on the Denver Broncos at home in Week 2.

Pittsburgh Steelers tight end Eric Ebron could be in store for a big season in 2020. The Steelers are considering Ebron a "mismatch chess piece" who they can line up all over the field in the offense. According to beat writer Nick Farabaugh, "Ebron's going to get a lot of targets and looks this year." Injuries limited Ebron to just 11 games with the Indianapolis Colts in 2019 but he did catch 13 touchdowns with Indy in 2018, back when he was catching passes from Andrew Luck. He will be catching passes from another talented quarterback in 2020 as Ben Roethlisberger has been getting good reviews on surgically-repaired elbow during training camp. Ebron is currently being drafted as a TE2 but he definitely has the potential and role to produce as a TE1 for fantasy in 2020.

Fantasy Spin: Ebron should have a solid role in the passing game this season and could be a popular target in the red zone for Ben Roethlisberger. Fantasy players could consider Ebron as a No. 2 tight end in fantasy leagues.

Pittsburgh Steelers TE Eric Ebron and TE Vance McDonald will likely battle for the starting role during training camp, according to Brian Batko of the Pittsburgh Post-Gazette.

Fantasy Spin: Both McDonald and Ebron saw a dramatic drop in their production in 2019, but the fact that Ebron is expected to at least be used as a red zone weapon gives him the better fantasy outlook. Consider him a touchdown-dependent TE2 with streaming potential.

Pittsburgh Steelers tight end Eric Ebron (ankle) tweeted from his personal Twitter account that he passed his physical and that he is running and cutting without pain. Ebron's 2019 season was cut short after he required surgery on his ankle. He signed with the Steelers as a free-agent but was not considered to be 100% even as recently as April. Ebron is in position for a bounce-back as the Steelers have frequently featured the tight end position during the Ben Roethlisberger era. Ebron can be drafted as an upside TE2 in fantasy drafts for the 2020 season.

Pittsburgh Steelers TE Eric Ebron (ankle) tweeted Thursday, May 14 he passed his physical. He added he has been able to run and cut without pain.

Fantasy Spin: Ebron is set to play a big role as a red-zone threat for the Steelers after signing as a free agent. He took a step back in 2019 with three touchdowns in 11 games after making a career-high 13 TD grabs and being named to the Pro Bowl in 2018.

The Pittsburgh Steelers hope TE Eric Ebron will be able to return to his 2018 Pro Bowl form, when he caught 66 passes for 750 yards and 13 touchdowns with the Indianapolis Colts. With Ebron and Vance McDonald on roster, the team may be able to utilize both players in double tight-end sets.

Fantasy Spin: Ebron should be considered a better TE2 or DFS play than a TE1 entering the year; he'll lose some targets to McDonald, who also had a career-year in 2018 (50-610-4) and will also be looking to rebound.

Pittsburgh Steelers TE Eric Ebron is one of six tight ends with at least 20 red zone touchdowns over the last five seasons, and he joins a Pittsburgh offense that ranked last in red zone scoring in 2019.

Fantasy Spin: A healthy Ben Roethlisberger under center should also go a long way to helping the Pittsburgh offense, but Ebron addresses a big need. He's a lower-end TE1 candidate, even if he could be a little touchdown dependent.

Pittsburgh Steelers TE Eric Ebron (ankle) said he has not fully recovered from his ankle surgery yet and could not play if the season started today.

Fantasy Spin: Ebron has several months to rehab the injury and should be ready for training camp. He likely will be a red zone target in the passing game and could be a low-end No. 1 tight end in deeper leagues.