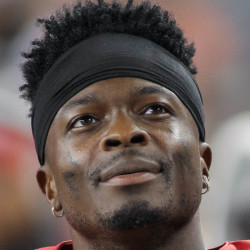 San Francisco 49ers WR Marquise Goodwin's name has popped up in trade talks recently. He has two years left on his deal worth about $10 million.

While the San Francisco 49ers think wide receiver Marquise Goodwin is too valuable to straight up cut, they are open to trading him, according to head coach Kyle Shanahan. Goodwin has two years left on his current deal and is scheduled to make $3.95 million in base salary in 2020 while counting $4.906 million against the salary cap. The 29-year-old played in just nine games in 2019 because of injury and had 12 catches for 186 yards and a touchdown. If he returns, he'd be competing with Jalen Hurd, Dante Pettis and Trent Taylor for a role behind Deebo Samuel in the passing attack. The 29-year-old has game-changing speed but has never played a full season in his seven years in the NFL and hasn't scored more than four TDs in a single season. He could benefit from a change of scenery but will have to rehab his fantasy value and stay healthy.

San Francisco 49ers WR Marquise Goodwin could be traded this offseason, according to head coach Kyle Shanahan Wednesday, Feb. 26. 'We'll have him come back and compete. If that doesn't work out, we could always possibly trade him,' Shanahan said. 'There's a lot of things that are open, but I don't have that exact answer yet.' Shanahan went on to cite the salary cap as a potential reason for a trade.

Fantasy Spin: Goodwin slipped down the depth chart behind Deebo Samuel, Emmanuel Sanders and Kendrick Bourne when healthy last season. With Sanders set to hit free agency, Goodwin could move back into a No. 2 or No. 3 role, but he wasn't too effective even when healthy last season. He finished the season with 12 receptions on 21 targets for 186 yards and a lone touchdown in nine games. He doesn't warrant much fantasy consideration in early drafts.

The San Francisco 49ers placed wide receiver Marquise Goodwin (foot, knee) on injured reserve on Tuesday. The seven-year pro has been dealing with chronic leg issues and will be shut down to undergo treatment. Goodwin managed just 12 catches for 186 yards and a touchdown in 2019 and its probable his three-year tenure with the Niners is over. The speedster will likely find his way onto another roster next year but at 29 years old, Goodwin holds minimal dynasty value. With Goodwin shelved, wideout Kendrick Bourne will continue operating as the primary third receiver. With five scores over his past six games, Bourne has emerged as a red zone threat and will be a low-volume WR5 in Week 15 against the Atlanta Falcons.

San Francisco 49ers WR Marquise Goodwin (knee) was placed on the Reserve/Injured list with a knee injury on Tuesday, Dec. 10.

San Francisco 49ers wide receiver Marquise Goodwin has been heavily underutilized this year, with just 21 targets on the season. This week, the team's top three pass-catchers are all questionable and could be game-time decisions: George Kittle (knee), Emmanuel Sanders (ribs) and Deebo Samuel (back). The 49ers are facing the Packers this week, a team that ranks amongst the bottom third of the league in pass defense. If all three of those pass-catchers are out, Goodwin could be a worthy dart throw as a WR3 in the deepest of leagues. Jimmy Garoppolo has spread the ball around a lot all year, but if his options become more limited, someone could step up and Goodwin would be one of the prime candidates. If any of the three questionable 49ers pass-catchers suit up, Goodwin is best to stay away from.

Fantasy Spin: Goodwin's absence will leave Emmanuel Sanders, Dante Pette, Deebo Samuel and Kendrick Bourne at receiver for the 49ers. Sanders is the clear No. 1 option, while Pettis or Samuel could warrant a desperation flex play with added work.

San Francisco 49ers WR Marquise Goodwin (non-injury) is expected to practice this week after missing the Week 8 game because of a personal issue.

Fantasy Spin: Goodwin likely will be active for the Week 9 game but has posted only 15 yards in his last two games. Fantasy players probably can find better options and keep Goodwin on the bench.

San Francisco 49ers wide receiver Marquise Goodwin (personal) returned to the team on Monday. Goodwin had been absent since last Thursday and missed Week 8s game dealing with a family issue. Goodwin has 196 scrimmage yards and a touchdown this season and was a fringe fantasy player even before the Niners acquired wideout Emmanuel Sanders. While hell likely continue playing meaningful snaps, hes off the radar in a run-first offense. Rookie receiver Deebo Samuel could see a downtick in usage with Goodwins return and is an upside WR5 in Week 9 against the Arizona Cardinals.

San Francisco 49ers WR Marquise Goodwin (non-injury) did not participate in practice Friday, Oct. 25, and is listed as questionable for Week 8.

Fantasy Spin: Goodwin is a risky option for fantasy players since the 49ers play in one of the later games in Week 8. Fantasy players probably should look for other options for their lineups and avoid Goodwin this week.

San Francisco 49ers FB Kyle Juszczyk (knee), OT Mike McGlinchey (knee) and CB Ahkello Witherspoon (foot) did not practice all week and have been ruled out for Week 8 versus the Carolina Panthers. OT Joe Staley (fibula) was limited in practice all week and is listed as doubtful. WR Marquise Goodwin (non-injury) did not practice for a second straight day Friday, Oct. 25, and is listed as questionable. RB Raheem Mostert (knee) and TE Levine Toilolo (groin) were limited in practice Friday and are also listed as questionable. DL Dee Ford (quad) continued to practice in a limited fashion Friday but no longer appears on the injury report. DL D.J. Jones (hamstring), TE George Kittle (groin), WR Deebo Samuel (groin) and WR Dante Pettis (knee) fully participated in practice Friday and have also been removed from the injury report.

Fantasy Spin: Goodwin hasn't received more than four targets in a game this season. He received just one look last week against the Washington Redskins and will be bumped down the depth chart by new addition WR Emmanuel Sanders.

San Francisco 49ers WR Marquise Goodwin (head) has passed the concussion protocol and should be available to play in the Week 8 game.

Fantasy Spin: Goodwin has dealt with injuries in the past but appears to be fine and should have a role in the passing game. He has posted only 181 yards in six games, so fantasy players probably can find more productive players to use.

San Francisco 49ers wide receiver Marquise Goodwin (head) is being evaluated for a head injury in Week 7 against the Redskins. Goodwin missed his only target before leaving the game. If he can't pass through the protocol on the sidelines, Goodwin won't return to play the rest of the game. In an offense without much receiving talent to begin with, Goodwin's injury is notable. Dante Pettis will now be the top wideout with Goodwin injured, and rookie Deebo Samuel is out for this contest. Expect the Niners to lean heavily on their ground game against a bad Redskins Defense.

San Francisco 49ers WR Marquise Goodwin (head) left the Week 7 game early and is being evaluated for a head injury.

Fantasy Spin: Goodwin will not return if he is diagnosed with a concussion, so fantasy players will need to keep an eye on the situation. He has posted only 11 catches in five games entering Week 7 and can be avoided in most leagues.