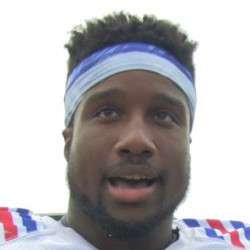 Philadelphia Eagles RB Boston Scott has a good chance to make the final roster because of his solid play at the end of the 2019 season, in the opinion of The Philadelphia Inquirer's Jeff McLane. The Eagles are expected to add another running back, but Scott could be a leading candidate for the No. 3 running back job.

Fantasy Spin: Scott probably will only see limited touches this season since Miles Sanders will receive most of the work and probably can be avoided in fantasy leagues.

Philadelphia Eagles RB Boston Scott could be in store for a breakthrough 2020 season, his third in the NFL, according to Dave Zangaro of NBC Sports Philadelphia. Zangaro says Scott should be the No. 2 option behind Miles Sanders, even if the Eagles add a veteran running back late in free agency.

Fantasy Spin: Scott appeared in 11 games last season and ran for 245 yards and five touchdowns on 61 carries. He added 204 receiving yards while catching 24 of 26 targets. His breakout game was a three-touchdown performance against the New York Giants in Week 17 as he totaled 138 yards from scrimmage. Sanders is the clear No. 1 option in Philly and a low-end RB1 target, but Scott could be had in the later rounds as a high-upside handcuff in deeper leagues.

Philadelphia Eagles running back Boston Scott is expected to compete for an offensive role in training camp instead of just competing for a roster spot. Miles Sanders will be the team's lead back in 2020, but even if the team adds a veteran backup, Scott is expected to compete for a role in Philly. The coaching staff truly believes that Scott's production down the stretch last year when Jordan Howard and Darren Sproles were injured wasn't a fluke. The 25-year-old finished with 61 carries for 245 yards (4.0 yards per carry) and five touchdowns on the ground, adding 24 receptions for 204 yards through the air. Scott should have late-round appeal in deep PPR leagues, especially if the Eagles don't add another running back before the season.