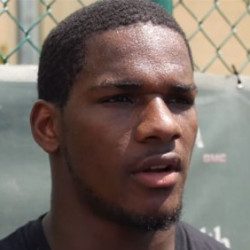 Walton got sporadic work as a deep reserve his rookie season. He had 14 carries for 34 yards and five catches for 41 yards. It had a hard time getting involved in the offense with two very talented backs ahead of him on the depth chart. Walton had all sort of off the field issues during the offseason, leading to his release. He might have a hard time finding work unless he gets things turned around real quick. Walton is a small, shifty back with top speed. He has great moves and can get to another level in a hurry. Walton lacks the size to be an ideal three-down back. He will get taken down easily and doesn't run through many defenders.

FANTASY OUTLOOK: Walton is a long shot to find the field at this point. He needs to clean up his act in a hurry.

After running into legal trouble as a member of the Bengals in his rookie year, his time is over in Cincinnati. Walton is sitting pretty comfortably as the third string back of the Miami Dolphins. There is competition in the backfield, but its between Ballage and Drake for the starting role and Laird and Gaskin are fighting for 4th string. Ignore Mark Walton in fantasy and take your bid at the Ballage/Drake preseason duel.

The Miami Dolphins waived running back Mark Walton on Tuesday morning. Walton was already suspended for violating the league's personal conduct policy, but the Dolphins were, "made aware of a police matter earlier this morning regarding Walton" according to Dolphins General Manager Chris Grier. Kalen Ballage will continue as the lead back for the Dolphins presumably for the rest of the season. Walton, still only 22 years old, may already be running out of chances in the NFL.

Miami Dolphins running back Mark Walton has been suspended for four games for violating the league's policy for substances of abuse. After their first win of the season, the Dolphins have quickly lost their starting running back for four games and their impressive rookie receiver Preston Williams (knee) for the rest of the year. Walton hasn't been doing much for fantasy owners as the lead back since the team traded Kenyan Drake, but he was worth flex consideration in deeper leagues for his role as the primary back. That role should now fall to Kalen Ballage for the next four games, but he's managed just 70 yards on 35 attempts (2.0 yards per carry) with two touchdowns on the season. Rookies Patrick Laird and Myles Gaskin will back him up with Walton suspended.

Miami Dolphins running back Mark Walton has a shot at having his best game of the season against the Jets on Sunday. Throughout the last two games, Walton is averaging nearly 13 carries, and though he has yet to find the end zone, he will likely continue to be more involved than Kalen Ballage, at least in the interim. New York is allowing a seventh-worst 27.41 fantasy points per game to opposing rushers this season, so if you are desperate for a streamer, the 22-year-old has a slightly higher upside in Week 9 than he has had in previous outings this year.

After starting his last three games, and with teammate Kenyan Drake being traded to the Arizona Cardinals, Miami Dolphins running back Mark Walton had an opportunity to claim the backfield for himself in a Monday night matchup with the Pittsburgh Steelers. This claim ended up mostly empty as Walton finished with only 35 yards on 11 carries, adding another 19 yards on three receptions. He also had an untimely turnover in the fourth quarter, coughing up a fumble in Pittsburgh territory with the Dolphins down 24-14. While his 11 carries dwarfed the three of backup Kalen Ballage, Walton's upside will be extremely limited on a bad Miami team and running behind a patchwork offensive line. Heading into a Week 9 matchup with the New York Jets, Walton is only a low-floor RB3.

While he may again be the starter against the Pittsburgh Steelers on Monday night, Miami Dolphins running back Mark Walton will still likely struggle to find success against a Steelers Defense thats giving up the 12th-fewest points to running backs this season. Walton got the surprise start against Buffalo in Week 7 and dominated deposed starter Kenyan Drake in rushing attempts, finishing with 14 to Drakes six. Leading the team in rushes didnt translate to fantasy success for the rookie out of the University of Miami, as Walton finished with just 66 yards rushing and lost eight yards on his only reception. With Drake on the trade block and Kalen Ballage playing just enough to vulture a touchdown in last weeks loss, Walton is simply too big of a risk to take a chance on in Week 8, even if hes the starting back on the leagues worst offense.

Getting the surprise start on Sunday in an eventual 31-21 loss to the Buffalo Bills, Miami Dolphins running back Mark Walton finished with 66 yards on 14 carries, adding one reception that lost eight yards. Waltons 14 carries easily topped Drakes six, as it seems that the latter is on his way to being traded before the Oct. 29 deadline. If and when Drake is traded, Walton will still likely be in a timeshare with Kalen Ballage and will still be running behind a patchwork offensive line on the leagues worst team. While he should continue to get steady work, Walton is nothing more than a gamble heading into a Monday night matchup with a Pittsburgh Steelers Defense thats giving up the 10th-fewest points to running backs on the season.

Following his first career start in a 17-16 loss to the Washington Redskins in Week 6, Miami Dolphins running back Mark Walton (thumb) has been limited in practice this week, but he should be good to go for Week 7. Even with the start, Walton is still clearly behind Kenyan Drake on the depth chart heading into a Week 7 matchup on the road against a tough Buffalo defense. While there is no reason to start Walton this week in any league, he would certainly become more interesting if Drake were to be dealt before the October 29 trade deadline. Until then Walton remains only a speculative stash.