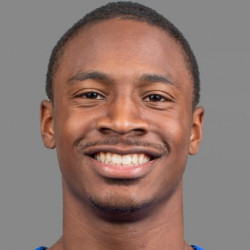 Atwell had his rookie season cut short because of a shoulder injury suffered in Week 8. He played eight games but got all of his work on special teams. He get a touch offensively. Atwell is in a really crowded receiver room and might have a hard time finding the field again this season. Atwell is a speed burner. He has great moves in space and is a tough cover out of the slot because of his quickness. He can get open in a hurry and make plays in space. He is really small, though, and can get pushed around in coverage.

FANTASY OUTLOOK: Atwell might get a few touches this year but don't expect much. He is a long shot to help fantasy teams.

Los Angeles Rams quarterback Matthew Stafford and wide receiver Cooper Kupp both pointed out second-year receiver Tutu Atwell's improvement this spring. Stafford said he's noticed that "everything" Atwell does "seems to be that much more intentional." The 22-year-old played only 10 offensive snaps last year but had a role on special teams before injuring his shoulder and being put on Injured Reserve in November. Kupp, Allen Robinson II and Van Jefferson are the Rams' top three receivers, but Atwell could play a role in his second NFL season after being drafted in the second round out of Louisville in 2021. Fantasy managers probably aren't taking Atwell, even in the late rounds of drafts, but he'll be one to watch this summer.