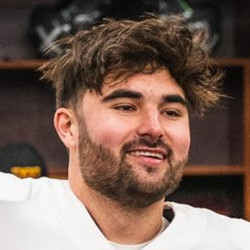 Washington used a fifth-round pick on Howell in this year's draft. The team hopes Howell can provide some competition at the quarterback spot and maybe eventually become the franchise quarterback. Howell made a lot of plays in college, posting some big numbers throughout his career. He was a little inconsistent, though, which led to his draft stock falling. Howell is a playmaker at the position. He does well in improvising and making plays from all over the pocket. His accuracy can be an issues a times, especially on the deep ball.

FANTASY OUTLOOK: Howell is not likely to find the field his rookie year but if he can make some strides, he could compete for the starting job in Washington down the road. He has some potential.

Washington Commanders rookie quarterback Sam Howell will enter the year as the team's No. 3 QB. Carson Wentz will be the starter, and the team considers Taylor Heinicke to be a high-end backup. But Heinicke is in the final year of his contract, so Howell has a chance to become the primary back in 2023. The Commanders also haven't had a quarterback start every game in a season since Kirk Cousins left after the 2017 campaign, and they've used at least three starters in each subsequent season. Howell slid to the fifth round of this year's draft after being a three-year starter for North Carolina. The 21-year-old won't wow anyone with his mobility, but he can make plays and should have some time to develop. Howell is unlikely to be on the fantasy radar in 2022, but he could be competing for a starting role sooner rather than later.

SNY's Ralph Vacchiano thinks the New York Giants could take North Carolina quarterback Sam Howell if he falls to them in the third round of the 2022 NFL draft. Howell seemingly got the Giants attention the most in the last few months. He can run and has a strong arm, but he needs time to develop and could sit and learn behind Daniel Jones in his rookie season. It's unlikely that the Giants would take a signal-caller in Round 2, but don't rule it out in Round 3. Vacchiano lists Penn State safety Jaquan Brisker, Baylor safety Jalen Pitre, Auburn running back Roger McCreary, Clemson cornerback Andrew Booth, Colorado State tight end Trey McBride, Ohio State tight end Jeremy Ruckert, North Dakota State wide receiver Christian Watson, Western Michigan receiver Skyy Moore, Georgia linebacker Nakobe Dean, Alabama linebacker Christian Harris and Georgia running back James Cook as potential Round 2 options for New York.

The Carolina Panthers are hosting North Carolina quarterback Sam Howell on Monday. The team already had a three-day stretch of hosting all the top-tier quarterbacks last week, including Howell. This follow-up is a continuation of their vetting process, which has appeared more focused on quarterbacks than any other team. Carolina remains a possible destination for recently displaced starters Baker Mayfield and Jimmy Garoppolo, but if we don't hear of a trade before Day 1 of the draft, it seems likely that they will select a new signal-caller. The 21-year-old Howell brings an interesting blend of arm talent and mobility. He finished his junior season with 3,056 passing yards, 24 touchdowns and nine interceptions while adding 828 rushing yards and another 11 scores on the ground.

The Pittsburgh Steelers have been one of the most interested teams when it comes to quarterback draft prospects, and they'll visit with Cincinnati quarterback Desmond Ridder on Thursday and North Carolina quarterback Sam Howell on Friday. Pittsburgh has the 20th overall pick in the first round of the draft, and even though they signed Mitchell Trubisky in free agency, they'll likely be looking to add another signal-caller in the draft to help replace the retired Ben Roethlisberger. Ridder is making the rounds in the pre-draft process, as he'll visit with the Carolina Panthers on Tuesday and with the Seattle Seahawks on Wednesday. Ridder could be the third QB off the board behind Malik Willis and Kenny Pickett later this month.

The Washington Commanders had a big turnout at North Carolina's Pro Day to watch quarterback Sam Howell. The New Orleans Saints are also among the team's in attendance on Monday. The Commanders pulled off a big trade to acquire quarterback Carson Wentz from the Indianapolis Colts this offseason, but he's probably not the long-term answer under center in D.C. Howell is an experienced starter with a strong arm, but he struggled with consistency last year and has a somewhat limited upside in a rather weak class of quarterbacks in this year's draft. If he were to land in Washington, he'd be able to sit and learn behind Wentz before possibly competing for a starting job in 2023.