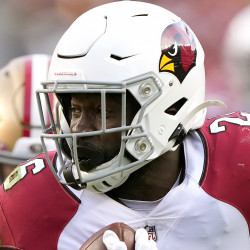 Arizona Cardinals running back Eno Benjamin carried the ball five times for 14 yards in Friday night's preseason win over the Cincinnati Bengals. The 23-year-old didn't have the best showing in this one, but his roster spot looks to be secure as reports out of training camp have been nothing but positive. Benjamin has a real shot to work as the team's RB2 behind James Conner, but he will also need to fight off Darrel Williams for touches. With Chase Edmonds departing in the offseason, there is a significant role in the Arizona offense up for grabs. That in itself is a good reason to consider Benjamin with a late-round flier if he is able to lock up the No. 2 spot on the depth chart.

Arizona Cardinals running back Eno Benjamin has been impressive during training camp, according to head coach Kliff Kingsbury. The 23-year-old is reportedly one of the hardest workers on the team. Despite that, Benjamin will have competition for the RB2 job in Arizona. The team has added Darrel Williams and drafted Keontay Ingram as well. James Conner will be the starter, but there will be plenty of backup reps available with the departure of Chase Edmonds. It sounds like Benjamin has a legitimate shot at the backup role heading into the season. Fantasy managers should keep their eye on Benjamin as the season gets closer.