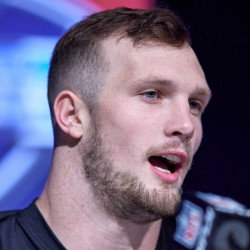 The Giants took Bellinger in the fourth round of this year's draft. He could compete for a big role right away with the Giants very thin at the position. Bellinger is a pretty good two-way tight end. He lacks a little consistency blocking, but is improving in that area. He also catches the ball well and has good size for the position. Bellinger is a solid route runner for a young player. He should at least be the top backup for the Giants but could be the starter in a hurry.

FANTASY OUTLOOK: Bellinger has some upside his rookie season. It would not surprise to see him starting for the Giants at some point during the season. He probably won't post huge numbers in that role but could be worth some spot starts. He can get around 35 receptions for 400 yards and four touchdowns.

New York Giants rookie tight end Daniel Bellinger was the clear No. 1 tight end at training camp practice on Friday. Chris Myarick saw action with the starters in rare two-tight end sets, while rookie Andre Miller lined up as a fullback in the jumbo goal-line formation. Bellinger is getting extra repetitions with the first-team offense with veteran Ricky Seals-Jones missing his sixth straight practice on Friday with an undisclosed injury. Even if Seals-Jones were healthy, though, there's no guarantee he'd beat out Bellinger for the top pass-catching role at the position for the Giants. The fourth-rounder briefly landed on the Physically Unable to Perform list with a quadriceps injury, but he's healthy now and is the favorite to open the year as the starting tight end.

Dynasty | Giants rookie tight end Daniel Bellinger has been the clear TE1 in camp Dynasty Analysis: The fourth-round rookie is an upside play in his first season and savvy dynasty owners understand new tight ends emerge from anonymity every year in the NFL. Bellinger should see plenty of snaps and routes to justify significant sleeper status for 2022 and an overdraft on his DLF TE39 ranking. He's an unknown at the next level but early field-time is crucial for developing tight ends and it looks like Bellinger will factor from week one.

New York Giants rookie tight end Daniel Bellinger (quadriceps) passed his physical and has been activated from the Physically Unable to Perform list. Bellinger was immediately working with the first-team offense at training camp practice on Wednesday, too. The Giants lost tight ends Kyle Rudolph and Evan Engram in free agency, but they added Ricky Seals-Jones and Jordan Akins at the position. Bellinger will receive consideration for the starting job in his first NFL season if he beats out Seals-Jones this summer. There's a lot to like about the 21-year-old, but it's notoriously difficult for rookie TEs to make an immediate impact in the NFL, and the Giants also have plenty of pass-catching weapons at the receiver position, provided they can stay healthy this year.

The New York Giants placed rookie fourth-round tight end Daniel Bellinger (quadriceps) on the Physically Unable to Perform list on Thursday. The Giants rookies reported to training camp on Tuesday. Bellinger was notably working with the first-team offense during offseason practices, but his chances of winning the starting tight end gig will take a hit if he misses significant practice time this summer. If Bellinger remains on the PUP list for the start of the regular season, he'd be forced to miss the first four games. The 21-year-old is trying to win the top pass-catching gig in New York over veteran Ricky Seals-Jones. Even if Bellinger returns to the practice field in short order, he's no lock to be a fantasy standout in his rookie season in an offense with plenty of receiving weapons.

New York Giants rookie fourth-round tight end Daniel Bellinger had plenty of opportunities with the first-team offense this spring and caught the ball well. Given the way he caught the ball and the way he was moving at organized team activities and minicamp, it's likely that he was underutilized at San Diego State. The Giants have an opening at the position, and Bellinger has a chance to make an impact in his first NFL season after making a strong impression this offseason. Ricky Seals-Jones and Jordan Akins are by no means proven at their position, so Bellinger could secure a pretty significant role eventually in 2022. It doesn't mean he's worth targeting late in drafts at the tight end position, but he's a player worth watching in training camp.

New York Giants second-round rookie slot wide receiver Wan'Dale Robinson could have a significant role, perhaps as a gadget player, even if he doesn't start. Fourth-round rookie tight end Daniel Bellinger saw plenty of work with the starters during spring workouts and could also become the team's No. 1 tight end if Ricky Seals-Jones falters. Sterling Shepard is recovering from a serious injury last year, and until he's back, Kadarius Toney will be the primary slot receiver. Robinson has a similar skill set to Toney and also has experience running the ball out of the backfield. At 5-foot-8, 178 pounds, Robinson's size could be a problem, but given all the injuries the Giants have dealt with at the position, he could find himself in a significant role in 2022.