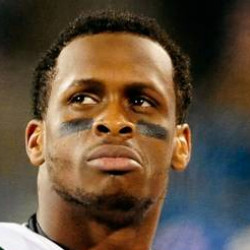 Smith was the top backup for the Seahawks for a second straight season last year and attempted five passes in that role. Smith has not attempted more than 45 passes in a season since 2014. He serves the role as a backup well, though. Smith is a good athlete that can make plays. He has a strong arm and can make plenty of plays with his legs. Smith does struggle with accuracy, though, and will miss on some easy throws. He also needs to do a better job of reading defenses and making better decisions. His career has not projected as expected, but Smith seems to be filling a backup role well these days.

FANTASY OUTLOOK: Unless he is starting, don't bother with Smith on your fantasy roster. He does have a little potential if forced into a start, though. He has the ability for the big game and will make some plays on the ground.

The Seattle Seahawks re-signed quarterback Geno Smith to an undisclosed deal on Thursday. Smith has served as Russell Wilson's backup for the last two seasons, and he will be back for a third year in 2021. The 30-year-old was a former second-round pick of the New York Jets and played in just one game last season, completing four passes in five attempts in a Week 17 win over the San Francisco 49ers. Smith will be insurance in case the Seahawks wind up trading Wilson before the 2021 season, although those rumors have cooled off significantly. Smith spent the first four seasons of his NFL career with the Jets before also playing for the New York Giants and Los Angeles Chargers for single seasons in 2017 and 2018. He did not play at all in 2019 and attempted just four passes for the Chargers in five games in 2018.

Free-agent QB Geno Smith (Seahawks) re-signed with the Seattle Seahawks Thursday, April 22. Terms of the contract were not disclosed.