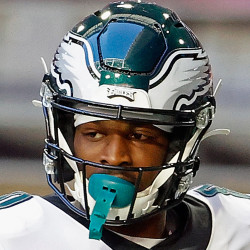 Watkins started much of the season for the Eagles last year, starting 12 of the 17 games he played. He got his weekly catches but didn't have many big games. He had double-digit fantasy points point just two games. He topped 50-receiving yards just three times. Watkins might move to more of a No. 3 or 4 receiver role this year but should get playing time. Watkins is a real speed burner. He can get down the field in a hurry. He isn't much of a route runner, though, and is lacks some consistency.

FANTASY OUTLOOK: Watkins is likely to finish with similar numbers to last season. He has some fantasy value in a reserve role. He will be consistent but not off the charts. He might get 50 receptions for 700 yards and a few scores.

Philadelphia Eagles third-year wide receiver Quez Watkins made some splash plays this spring, including a 40-plus-yard touchdown catch during organized team activities from quarterback Jalen Hurts. The Eagles coaching staff has talked up Watkins every chance they get and believe he has the tools to be a highly productive receiver. However, finding consistent targets for him may be the only problem, with A.J. Brown, DeVonta Smith and Dallas Goedert all commanding looks in the offense. Watkins' fantasy appeal certainly took a hit when the team acquired Brown from the Titans, but he could be sneaky good with less attention from opposing defenses as the No. 3 wideout. The 24-year-old had 43 receptions on 62 targets for 647 yards and one touchdown in 17 games (12 starts) in his second NFL season in 2021.

Philadelphia Eagles wide receiver Quez Watkins doesn't see his role changing at all despite the addition of A.J. Brown. "We're all good guys, we're all going to compete, we're all going to do our part. My role is not going to change -- I'm going to continue to do what I do," Watkins said. The 23-year-old improved in his second NFL season last year, catching 43 passes for 647 yards and one touchdown in 17 games (12 starts). But the Eagles finished first in rushing last year, and the addition of Brown bumps Watkins to third on the receiving depth chart. Watkins' speed and ability to play in the slot will help him in this improving offense, but he'll have to hold off Zach Pascal in order to be fantasy relevant on a weekly basis.