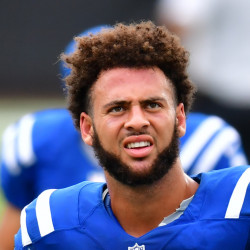 Indianapolis Colts wide receiver Michael Pittman Jr. had a breakout season in 2021, finishing with 88 catches for 1,082 yards and six touchdowns. While those numbers are impressive, some believe the wideout will have an even finer year now that Matt Ryan is on the roster, with an NFL scout stating, "there's no question in my mind that a better quarterback is going to get Pittman the ball more often." Although a lot of the playbook is designed to keep Jonathan Taylor involved, Pittman still has an excellent chance to be a more productive fantasy option with Ryan under center throughout the 2022-23 campaign.

Indianapolis Colts wide receiver Michael Pittman Jr., who finished last year 18th in the NFL in receiving yards and 18th in catches, is a huge fan of new quarterback Matt Ryan. Pittman has been very impressed with the ball placement of Ryan, and the new signal-caller should help Pittman achieve his 2022 goal of proving that he's a true No. 1 receiver in the league. "Working on route discipline," Pittman said of his main area for improvement. "Sometimes you just go out there and start playing football. Yes, I can make plays like that but you want to stay on QB timing because it helps everybody else flow so I'm really working on that." The 24-year-old third-year wideout is being ranked as a low-end WR1/high-end WR2 heading into fall fantasy drafts, and he should see an uptick in production if he continues to gain chemistry with Ryan in training camp.