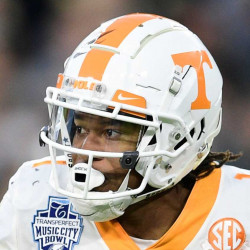 The Chicago Bears have been working rookie wide receiver Velus Jones Jr. at inside and outside receiver during organized team activities. "We've thrown him into the fire pretty quick, put him at two positions immediately," receivers coach Tyke Tolbert said. "Get him to learn it now. Because we want him to learn the whole concept but, specifically, a couple of positions to get him going. The more he can do, the more, obviously, he'll have a chance to play." Getting the ball in the hands of Jones, who will also work as a returner, will be a priority this offseason. Given the fact that Equanimeous St. Brown and Byron Pringle are behind Darnell Mooney on the receiving depth chart, Jones could be given plenty of chances to make things happen with his speed and playmaking abilities in his first NFL season.

Chicago Bears wide receiver Velus Jones Jr. has agreed to a four-year contract. The third round rookie figures to get plenty of attention this upcoming season. The Bears lack legitimate talent at wide receiver, so Jones could have a decent role. In 2021, Jones finished with 62 receptions, 807 receiving yards, and seven touchdowns during his senior year at Tennessee. The speedy wideout could be used in multiple roles, but we'll see how his game translates to the professional level.

The Chicago Bears have been impressed with rookie wide receiver Velus Jones Jr.'s speed, but they also like his overall makeup. Offensive coordinator Luke Getsy said Jones is a "physically mature dude." "I mean he can handle this league, you can see that already. Then the speed just jumped at you on the tape. When that guy gets the ball in his hands, he looks like 4.3 on the field. Not many guys can do that," Getsy said. Jones might not be a dynamic outside receiver like the ones taken in the first round, but his rare speed can make him versatile and able to move around in the offense. He'll have the opportunity to carve out a role as the No. 4 receiver in his rookie season behind Darnell Mooney, Byron Pringle and Equanimeous St. Brown.

Chicago Bears third-round wide receiver Velus Jones Jr. had limited offensive production in his six-year college career, but the Bears love his 4.3-second 40-yard dash speed and hope to line him up outside, in the slot, in the backfield and as a returner on special teams. The 24-year-old is old for a rookie, but his speed is what sets him apart. With Darnell Mooney and Byron Pringle as the team's top two receivers, Jones could carve out a role as Chicago's No. 3 wideout in his first season in the NFL. Jones can create mismatches at different spots on the field with his speed and will have opportunity, but he'll still be much more attractive as a dynasty asset than a redraft one on 2022.

Baylor wide receiver Tyquan Thornton led all players at his position on Thursday by clocking an unofficial 4.21-second 40-yard dash at the NFL scouting combine. That time would have set a record for the combine, but his official time was later determined to be 4.28, which was the fastest of the day. In all, eight receivers had sub-4.4-second showings, which tied for the most by the position at the combine in any year since 2006. Tennessee's Velus Jones Jr. had the second-fastest time at 4.3 seconds. Memphis wideout Calvin Austin III clocked in at 4.32 seconds. SMU's Danny Gray (4.33 second), Rutgers' Bo Melton (4.34), North Dakota State's Christian Watson (4.36), Ohio State's Garrett Wilson (4.38) and Ohio State's Chris Olave were the others to break the 4.4-second mark.