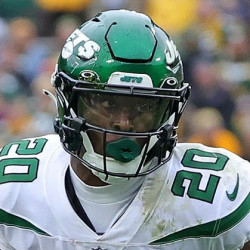 New York Jets rookie second-round running back Breece Hall, who has been at the team's facilities Tuesday morning, is expected to sign his four-year rookie deal in time for rookies to report on Tuesday, according to a source. It was reported earlier that Hall was officially a holdout as rookies reported to training camp for the Jets, but it looks like that won't be the case. Hall was the consensus top running back in this year's draft class, and he's expected to be the Jets' No. 1 RB in his rookie season in what could be a run-heavy offense. Michael Carter will still be involved, mostly as a pass-catcher, but Hall should handle most of the early down work. The 21-year-old should be in the RB2 mix in fantasy drafts this fall.

Dynasty | Breece Hall will sign his rookie deal. Dynasty Analysis: There were rumblings Hall would hold out for a bit as he was seeking more guaranteed money, but he'll end up getting into camp on time. Any absence would have opened the door a touch for Michael Carter to earn some more early season snaps, but that won't be the case now. Hall is entrenched as our overall top rookie this season.

New York Jets offensive coordinator Mike LaFleur was impressed with rookie second-round running back Breece Hall during offseason workouts. "He's 220 pounds, and he's covering a lot of yardage when he doesn't look like he's covering a lot of yardage," LaFleur said. "He's fast, so he gets up on people pretty quick. And then he's such a fluid, big-body target that when he makes his move it's not like a smaller running back when you feel like you have to put it on them. He's got a big catch radius and I know the quarterback is going to feel that." Hall and Michael Carter are expected to share RB duties in 2022, but Hall is expected to take over the lion's share of duties sooner than later, making him an RB2 target in fantasy in his rookie season.

The Jets, who acquired the No. 36 overall pick from the Giants, selected Iowa State running back Breece Hall on Friday during the NFL Draft. After New York made a splash in the first round by taking Ahmad Gardner, Garrett Wilson, and Jermaine Johnson, the team continued to move toward the future by taking arguably the best back in the draft, a player who had a rushing touchdown in 24 consecutive collegiate outings. The selection isn't good news for Michael Carter Jr., although he may split time with Hall during the 2022-23 campaign.

On Wednesday, an ESPN Insider report from Jeremy Fowler and Dan Graziano speculated on what the Buffalo Bills might do with their first round pick (25th overall). According to Fowler and Graziano, there is some belief across the league that the Bills could make something of a "luxury pick" at No. 25 due to the fact that they have no clear and immediate needs on their roster. In this case, Iowa State running back Breece Hall could fit the "luxury pick" criteria perfectly. Widely regarded as the top running back in the draft, Hall could give the Bills' elite offense a new dynamic. Fowler and Graziano wrote, "Hall would give them an explosive playmaker at the position that new offensive coordinator Ken Dorsey could use in tandem with Singletary."

Iowa State running back Breece Hall, perhaps the top running back in this year's class, has visited with the Houston Texans, Buffalo Bills, New York Giants and Washington Commanders. If Hall is taken in the first round of next week's draft, it'll likely be in the latter stages, and the Tampa Bay Buccaneers would also make sense at No. 27. The 20-year-old led all players at his position at the NFL combine with a 40-inch vertical jump and a 10-foot-6 broad jump. In his final two seasons at Iowa State, Hall had 3,044 rushing yards and 41 rushing touchdowns, but he's also a capable pass-catcher. He has a chance to become a team's primary ball-carrier by the end of his rookie season, but his fantasy value will all depend on where he winds up.

The Houston Texans are hosting Iowa State running back Breece Hall on Wednesday. The 20-year-old Hall is considered the running back most ready to make an impact as soon as he sees the field. Projected by many dynasty rankers as the No. 1 pick in rookie drafts, his landing spot has enormous ramifications for fantasy. At Iowa State, Hall had back-to-back seasons of over 1,400 rushing yards, a yards-per-carry mark of over 5.5 and at least 20 rushing touchdowns. He has already met with Washington, Buffalo and the New York Giants. Houston has three of the top 37 picks in the upcoming draft, with running back one of their biggest needs. While the excitement for Hall is through the roof, landing in Houston would lower his immediate outlook until the team gets more pieces around him.