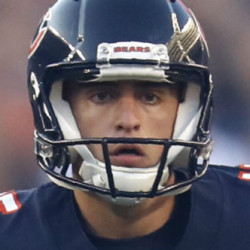 The New York Jets kicking competition between Greg Zuerlein and Eddy Pineiro this offseason has been "neck and neck," according to special teams coordinator Brant Boyer, but it's mainly because neither kicker has impressed all that much. The Jets brought in Greg the Leg this offseason after Pineiro made all 17 of his kicks in five games. Zuerlein made 29 of his 35 field-goal attempts for the Dallas Cowboys last year, but he was released in March. The kicking competition will continue in training camp and into the preseason, and it remains to be seen who will come out on top, but fantasy managers can probably avoid the situation in drafts.

The New York Jets re-signed restricted free-agent kicker Eddy Pineiro to a one-year deal worth up to $2.75 million on Monday, according to his agents, Drew and Jason Rosenhaus. Pineiro made all eight of his field goals and missed one of his 10 extra-point attempts in five games for the Jets last year. The 26-year-old has made 86.1% of his 36 field-goal attempts in 21 career games with the Jets and Bears (in 2019) and has missed three of his 36 extra-point tries. He's expected to compete for starting placekicking duties with the recently signed Greg Zuerlein, with Zuerlein likely to have a leg up on the competition this summer in training camp.

The New York Jets tendered restricted free-agent kicker Eddy Pineiro for one year at $2.433 million on Wednesday, according to his agent, Drew Rosenhaus. Pineiro played well in five games down the stretch for the Jets last year, making all eight of his field-goal attempts and nine of his 10 extra-point tries. The 26-year-old will now be the favorite to start in Week 1 of the 2022 season over Matt Ammendola. Pineiro has made 31 of his 36 field-goal tries and 36 of his 39 extra-point attempts in 21 games over his two NFL seasons with the Jets and Chicago Bears. He made 82.1% of his 28 field-goal attempts in his rookie season in 2019 for the Bears in 16 games.