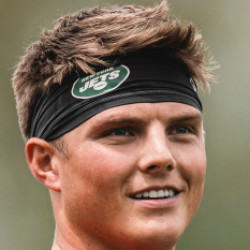 Dynasty | Jets sophomore quarterback Zach Wilson continues to struggle with accuracy in camp Dynasty Analysis: Wilson still seems to be trending in the right direction though multiple reports have said the second-year quarterback has been all over the place with his accuracy. The Jets have a retooled offense and it's not uncommon for the defense to have the upper hand until chemistry can be created. Wilson should get a long leash in 2022 though things could get interesting for DLF's QB18 if the team fails to improve late into the season. Wilson remains a developmental QB2 with upside.

New York Jets quarterback Zach Wilson looked more comfortable dealing with pressure from the defensive line at training camp practice on Friday than he did the day prior, but two of his three incompletions on the day were interceptions. It wasn't all bad, though, as Wilson showed improvement in the red zone and threw an impressive touchdown pass to receiver Corey Davis. Wilson's final interception was a bad one and looked to be a miscommunication, but he ended practice with two touchdown passes -- one to rookie Garrett Wilson and the other to Davis. The 22-year-old signal-caller will be expected to decrease his turnovers in Year 2, and he has plenty of offensive weapons to take a leap forward in his sophomore season. But until we actually see it in the regular season, he'll be a low-end QB2 in fantasy.

New York Jets quarterback Zach Wilson "looks much more comfortable doing that than he did a year ago," head coach Robert Saleh said about Wilson's ability to improvise and make plays on his own. Improvisation is expected to become a bigger part of Wilson's game in his second NFL season. Wilson was facing constant pressure in training camp practice on Thursday, but he didn't turn the ball over and completed seven of 10 passes. The 22-year-old added muscle in the offseason and is looking to make a Year 2 leap with plenty of weapons in the passing game. Wilson has all the physical tools to be successful as a starter, but until he improves his accuracy and decision-making, he'll continue to be a QB2 with upside.

New York Jets left tackle Mekhi Becton's left-tackle days "aren't over," according to head coach Robert Saleh. Becton was drafted 11th overall in 2020 out of Louisville and had a strong rookie season, starting 13 games for the Jets. However, it's been all downhill since then, as he played in just one game last year before tearing his MCL and never returning. Backup George Fant stepped in nicely on quarterback Zach Wilson's blind side in 2021 after Becton was injured, but there's still a chance that Becton could win his starting job back if he proves he's fully healthy in training camp. If Becton isn't up to the task, the Jets could move him to right tackle.

New York Jets quarterback Zach Wilson didn't have the most productive rookie season. He finished with 2,334 yards and nine touchdowns. The 22-year-old also threw 11 picks while completing a miserable 55.6% of his attempts. However, after reports surfaced that Wilson had a lousy spring, Braxton Berrios recently praised the young signal-caller. During an appearance on the Adam Schefter Podcast, the wideout claimed Wilson has "aged so much" since last season, referring to his physical and mental development. Berrios also believes the former BYU Cougar will be "in a different place than he was last year," which could be the case with a season under his belt. Additionally, the Jets made some moves to bolster the offense, adding Breece Hall and Garrett Wilson in the first round of the 2022 NFL Draft. Nevertheless, although Wilson has a way to go before becoming a reliable fantasy contributor in any format, dynasty managers who already have him on the roster may want to hang on to him a bit longer to see what happens.

It's still early in the offseason, but The Athletic's Connor Hughes writes that New York Jets second-year quarterback Zach Wilson wasn't overly impressive through four media-open organized team activity practices. Wilson struggled with his accuracy, and his decision-making was questionable, at best. It wasn't all bad for the 22-year-old, but Hughes was hoping to see more conviction and decisiveness. For what it's worth, the Jets aren't concerned and see signs of improvement as he trusts his reads much more. If Wilson's struggles continue into training camp, then there might be a little panic from the Jets, but for now, it's just something to watch. Wilson has some new toys in the passing game and he should take a step forward in 2022, but he'll still only be a low-end QB2 in fantasy.

Dynasty | Jets sophomore quarterback Zach Wilson was listed as a "Faller" in a recent OTA report Dynasty Analysis: It's obviously very early still and the pads have yet to go on but, nonetheless, it's not the trend we have been looking for. Citing issues with accuracy, ball placement and decision-making, labeled as "questionable at best," interceptions have been frequent. There also have been positive plays but the warning flag is up with training camp getting underway later this month. Wilson is a tenuous QB18 on DLF's quarterback ranking.

New York Jets left tackle Mekhi Becton said his knee is close to 100% and said his conditioning is fine. He neglected to reveal his current weight, but said he'll be ready for training camp at the end of July. After starting 13 games in his rookie season in 2020, Becton made only one start in 2021 after suffering an MCL injury in Week 1 that he never recovered from. George Fant replaced Becton on quarterback Zach Wilson's blind side and did a commendable job, so the two will battle for the starting left tackle job in training camp this summer. The 23-year-old might be making progress in regards to his knee injury, but it's far from a certainty that he'll be able to regain the starting gig after he was the 11th overall pick in the 2020 draft.

New York Jets second-year quarterback Zach Wilson didn't look great at the beginning of voluntary organized team activities on Wednesday, but he rebounded in 11-on-11 drills and made three nice throws over the middle of the field. Wilson only completed 55.6% of his passes and tossed nine touchdowns and 11 interceptions as a rookie. He seems to be more confident this year, but Pro Football Network's Mike Kaye doesn't think Wilson is at the point where he can raise the performance of others. However, rookie receiver Garrett Wilson and rookie running back Breece Hall should help Wilson, as well as the continued growth of Elijah Moore and Michael Carter. The Jets offensive line is much-improved, so the pieces are there for Wilson to make a second-year leap.

When New York Jets quarterback Zach Wilson wasn't throwing to his receivers this offseason, he was working to add weight to his 6-foot-2 frame. "He looks beefy -- in a good way," head coach Robert Saleh said. Wilson focused on a healthy diet and was meticulous about what he ate, according to those close to him. He wants to improve from an underwhelming rookie season and is receiving praise for his mature approach heading into his sophomore season. On pass attempts between one and 10 yards, Wilson completed a league-low 62% of his passes, according to ESPN Stats &amp; Information. The Jets added some more weapons to the offense in rookie wide receiver Garrett Wilson and running back Breece Hall, but Wilson will have to take a step forward in 2022 before fantasy managers consider him anything more than a low-end QB2.

The New York Jets selected tackle Max Mitchell out of Louisiana at pick No. 111 in the 2022 NFL Draft. New York has been one of the most aggressive teams during the draft, selecting playmakers on both sides of the ball. Already with an underrated offensive line, the Jets are aiming to give second-year quarterback Zach Wilson every chance to succeed. The 22-year-old Mitchell also has the zone-blocking experience to complement the team's shiny new toy in running back Breece Hall.

New York Jets general manager Joe Douglas said that left tackle Mekhi Becton (knee) is not participating in the team's voluntary offseason workouts in Florham Park. Becton is working out on his own in Dallas instead. The former 11th overall pick in 2020 started 13 games at left tackle in his rookie season, but he suffered an MCL injury in the season opener last year and never made it back for the Jets. The 23-year-old now will have to compete with George Fant in training camp if he wants to earn his starting job back on quarterback Zach Wilson's blind side. Becton should be fully healthy for the start of training camp, but it remains to be seen if he can show the team enough to become a starter again.

New York Jets quarterback Zach Wilson is embracing the "no offseason" vision. The soon-to-be second-year signal caller is traveling across America to work with his teammates in an attempt to develop a better rapport after a rocky 4-13 campaign in 2021. Teammate Braxton Berrios was one of Wilson's first stops and described the QB as "willing to do whatever it takes," per Rich Cimini of ESPN. While New York has reportedly been in the market to add a top pass-catching target, Wilson has focused on working with the ones that he is set to throw to with frequency in '22. The 22-year-old compiled just nine touchdowns and 11 interceptions across his 13 starts during his rookie campaign. His upside will earn him a look in two-QB redraft formats, while he stands to possess some tournament DFS intrigue against favorable defenses.

The New York Jets are signing free-agent offensive guard Laken Tomlinson to a three-year, $40 million deal on Monday. The maximum value of the deal is $41.2 million, with $27 million guaranteed. The former first-round pick (28th overall) of the Detroit Lions in 2015 has been an important piece of the San Francisco 49ers offensive line over the last five seasons, but now he'll head to New York, where he'll be tasked with improving their O-line in front of young quarterback Zach Wilson. Tomlinson will be reuniting with head coach Robert Saleh in New York. The 30-year-old is coming off his first Pro Bowl season in 2021 when he started all 17 regular season games for the Niners. Tomlinson missed just one game in his five seasons in San Fran.