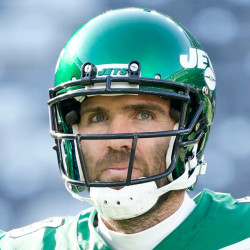 Flacco lasted eight weeks as the starter for the Broncos last year before suffering a neck injury that sidelined him the rest of the year. Flacco was up and down as the starter before getting hurt. He had six touchdowns to five interceptions in eight games and one 300-yard games. He had three games with fewer than 200 yards and eight total turnovers (three lost fumbles). HIs days as a starter are likely over. He is 35 years old and struggled when in the lineup each of the past two years. Flacco should make a valuable backup for the Jets this season because of all his experience and past success. Flacco has a strong arm and the ability to move around the pocket well. He lacks some accuracy at times and will make some poor decisions when rushed. Flacco has been a top performer in the playoffs but can't always sustain that success in the regular season.

FANTASY OUTLOOK: Flacco's career is trending the wrong way. He might be worth a look if getting a chance to start for the Jets but even then, the numbers the past few years don't suggest consistency in that role. He'll be a risk to use.

It may be a little harsh to call Joe Flacco old, as he will be entering this season at 34 years of age. In a time where players like Drew Brees and Tom Brady are playing into their 40s, 34 is not that old. Flacco is a different beast though, as he is only a few seasons removed from a torn ACL, and it was just last season when a hip injury cost him his job in Baltimore.Going from the East coast to the mountains is a lateral move for Flacco. The run game in Denver is going to be the main focus, with last years Cinderella Phillip Lindsay and Royce Freeman providing the bulk of the offense. Flacco should be able to stay in the pocket as a young core of receivers attempt to get open for him. If Emmanuel Sanders can come back healthy there will at least be a veteran presence on the field. But with his injury and his age of 32, it is hard to know how he will react to treatments and when he might be a full go. This leaves it to Courtland Sutton, Tim Patrick and my personal favorite Daesean Hamilton to fill in. There is a good chance no one is this group will sniff a top-12 fantasy finish, which hurts Flacco's ceiling. As a quarterback who loves his tight ends, Flacco does get a little boost with the arrival of Noah Fant, but he is still fighting an uphill battle for fantasy value.With the run game of Lindsay and Freeman looking to be the driving force of the offense, it will be hard for Flacco to be a fantasy star. Yes, Hamilton and Sutton along with Noah Fant could produce some value for him, but they are not enough to lend credence to drafting him. At best he is a QB2 in two-quarterback leagues. At worse, he is not even a streaming option in standard leagues. Flacco is currently not being drafted in most leagues and this is the right move. He should remain on waivers for the entire season except in the direst of situations. If that situation hits? Your season is probably over anyhow.

New York Jets quarterback Joe Flacco (neck) says that he is embracing his new role as the backup quarterback to Sam Darnold. He says that his job is to help the team get better and to help a young quarterback see things as clearly as possible. Flacco started the first eight games for the Denver Broncos before suffering a season-ending neck injury. He still believes he can be a starting quarterback in the league, but understands his new role with the Jets.

New York Jets quarterback Joe Flacco (neck) says that he won't be ready to play by Week 1 of the regular season. I cant speak to exactly when Im going to be ready, but it will not be day one," Flacco said. That means that Jets will likely have to carry David Fales or fourth-round pick James Morgan until Flacco is ready to go. Flacco started the first eight games for the Denver Broncos last season, but then missed the rest of the season after suffering a neck injury. It appears he has not fully recovered yet, so who knows when Flacco will be back.

New York Jets QB Joe Flacco (neck) said Tuesday, May 26, on SiriusXM NFL Radio he won't be ready for the season opener following offseason surgery. 'I can't speak to exactly when I'm going to be ready, but it will not be Day 1,' Flacco said. Rich Cimini of ESPN expects Flacco to debut for the Jets in mid-September.

New York Jets QB David Fales could make the final roster if QB Joe Flacco (neck) is not cleared for the start of the season. QB James Morgan is expected to be the No. 3 quarterback in 2020, so the Jets may have to keep four quarterbacks on the roster.

New York Jets quarterback Joe Flacco (neck) has resumed throwing, but is not expected to be ready to play until the middle of September. He started the first eight games for the Denver Broncos last season before going down with a neck injury. It's uncertain at the moment if Flacco will be ready to play by Week 1 of the regular season. Quarterback David Fales or fourth-round pick James Morgan could be asked to back up Sam Darnold to begin the season. More information on Flacco's injury should be known closer to the start of the season.

New York Jets QB Joe Flacco (neck) has been cleared by doctors to start throwing a football, according to sources. The team expects Flacco to be cleared for contact in early September.

Updating a previous report, free-agent QB Joe Flacco (Broncos) agreed to a one-year contract with the New York Jets, his agency said Friday, May 22. Financial terms were not disclosed.

Fantasy Spin: Flacco, reportedly healthy after neck surgery, enters as a backup. He is more of a name than a fantasy consideration -- which would require a Sam Darnold injury/illness. There's nothing to see here for 2020 fantasy football draft plans, of course.

Free-agent QB Joe Flacco (Broncos) could receive interest from the New York Jets if they are looking for an experienced backup quarterback, in the opinion of ESPN.com's Rich Cimini.

Free-agent quarterback Joe Flacco (neck) underwent a 45-minute disc repair in early April, according to a source. Flacco is expected to be cleared in late August to mid-September. The 35-year-old's season ended prematurely in 2019 with the Broncos, as he only played in eight games. He was wildly mediocre in the first half of the season, completing 171 of his 262 attempts (65.3 percent) for 1,822 yards, six touchdowns and five interceptions for a QB rating of 85.1. Flacco has said that he wants to continue his career in 2020, but the reality is that not many teams will be looking to add an over-the-hill signal-caller coming off neck surgery, even as a backup. It's possible that Flacco doesn't play in the NFL again, but if he does, it'll be strictly as a backup and mentor to a younger QB.

Free-agent QB Joe Flacco (neck) has not signed with a team at this point because he is recovering from neck surgery he had in April. He is expected to be cleared by late August or early September.

Free-agent QB Joe Flacco (Broncos) said he would be open to signing with the Philadelphia Eagles this offseason.

Fantasy Spin: Flacco doesn't have much fantasy appeal left at this point after totaling 18 touchdowns against 11 interceptions over those 17 combined games in 2018 and 2019. He'd be a low-end QB2 if given a starting opportunity.

Free-agent QB Joe Flacco (neck) did not need to undergo surgery on his neck and is expected to be cleared to play in the 2020 season.

Former Denver Broncos quarterback Joe Flacco (neck) -- he was released on Thursday -- didn't require neck surgery and the belief is that he'll be healthy for the 2020 season. Flacco had two medical opinions on an MRI of his neck and has been in his Baltimore-area home and hasn't been checked by the Broncos medical team since season's end. He was 2-6 in eight starts before suffering a neck injury last year with six touchdowns and five interceptions. Drew Lock is taking over as Denver's starter in 2020 after finishing the year strong. Flacco, a former Super Bowl MVP, will look for a backup gig on the open market.

The Denver Broncos informed quarterback Joe Flacco (neck) that he is being waived on Thursday with a failed-physical designation, according to a source. Flacco, a former Super Bowl MVP, played only half a season in 2019 before suffering a season-ending neck injury. He's reportedly recovering from the injury and wants to play in 2020, but he'll have to do that elsewhere and will only get looks as a veteran backup option around the league. The 35-year-old is completely off the fantasy radar at this point in his career.

Denver Broncos QB Joe Flacco (neck) on THursday, March 19 was informed that he is being waived with a failed physical designation, per source.

Fantasy Spin: Flacco, who turned 35 in January, averaged only 227.8 passing yards per game in 2019 with six total TDs and five interceptions in eight starts in Denver, and it's becoming clear that his days as an NFL starter are past.

Denver Broncos quarterback Joe Flacco is likely to be released on Wednesday in order to clear some salary following the trade for defensive tackle Jurrell Casey, according to a source. This has been expected for a while, especially since it's unclear how healthy the veteran quarterback is following a season-ending neck injury in 2019. Flacco made just eight starts last year and tossed six touchdowns and five interceptions and was wildly mediocre. At age 35, he won't be anything more than a veteran backup at this point in his career. The end is near for the former Super Bowl champion. The Broncos signed Jeff Driskel on Tuesday to compete for the backup gig.

Denver Broncos QB Joe Flacco is expected to be released or traded by the end of the week, according to Mike Klis of 9News.

Denver Broncos head coach Vic Fangio said that quarterback Joe Flacco (neck) still has not been medically cleared. The Broncos aren't set on having a veteran as the backup to Drew Lock in 2020, so it's almost inevitable that the Broncos will part ways with Flacco, who would be due $23.65 million next season. He's expected to be healthy for next season, but wherever Flacco winds up, he'll just be a backup and won't have much fantasy relevance at all in any format.