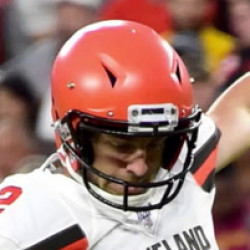 The Cincinnati Bengals are claiming kicker Austin Seibert off waivers from the Browns on Tuesday, according to sources. Randy Bullock's status is in question for Thursday night against Cleveland, so Seibert could wind up kicking against the team that just cut him in Week 2. Seibert missed a 41-yard field goal and an extra-point attempt in the Week 1 loss to the Ravens, so he shouldn't be on the fantasy radar this week if he makes the start over Bullock. The 30-year-old Bullock made two of his three field-goal tries in the 16-13 loss to the Chargers on Sunday and also hit an extra point.

The Cleveland Browns released kicker Austin Seibert on Monday. Seibert struggled in the team's Week 1 loss to the Baltimore Ravens, missing an extra point and a 40-yard field goal in the contest. The move was expected after Cleveland signed kicker Cody Parkey earlier in the day. Seibert heads to the free-agency bin just a year after the Browns spent a fifth-round rookie pick on him. He wraps his Cleveland career with an 83.3% field goal percentage (25 of 30) in 17 games.