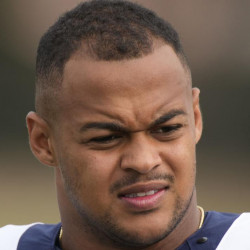 Denver Broncos tight end Noah Fant caught four of his five targets for 57 yards and a touchdown in the 26-21 Week 2 loss to the Steelers. He now has nine catches for 138 yards and two touchdowns, just one short of his rookie-season total, through two games in 2020. Quarterback Drew Lock (shoulder) will be out anywhere from two to six weeks, but the drop-off to Jeff Driskel may not affect Fant all that much. In fact, Driskel could lean heavily on Fant moving forward. As one of the top receivers in Denver's offense with Courtland Sutton (knee) out for the year, Fant has become a solid TE1.

Denver Broncos tight end Noah Fant had a team-high five catches for a team-high 81 yards and a touchdown in the 16-14 Monday night loss to the Titans. Fant looked good in this one and is a favorite of quarterback Drew Lock, so he has clear TE1 upside in his second season in the league. Targets might be harder to come by when No. 1 wideout Courtland Sutton (shoulder) returns to the fold, but Fant has plenty of room for improvement on his 2019 season in this intriguing offense. Against a stout Steelers Defense that just held Evan Engram to only two catches, Fant will be more of a TE2 for fantasy owners in Week 2.

Denver Broncos tight end Noah Fant said "I'm moving around a lot and he's using me in different places," when asked about offensive coordinator Pat Shurmur's approach in training camp. It remains to be seen how much the Broncos use two-tight end sets, but Fant will be the club's primary pass-catching tight end regardless. The 22-year-old from Iowa had his ups and downs in his rookie season, but he showed intriguing upside when quarterback Drew Lock took over late in the season. Many pundits are prognosticating a breakout season for the 2019 first-rounder, and he'll have a solid matchup against Tennessee in Week 1 on Monday night. Treat Fant as a low-end TE1 for that showdown.