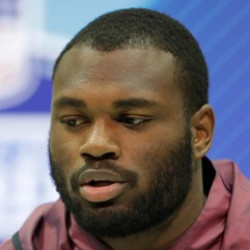 Denver Broncos running back Royce Freeman's spot on the 53-man roster was considered shaky before training camp, but he enters Week 1 against the Titans on Monday night as the No. 3 back behind Melvin Gordon III and Phillip Lindsay. Gordon and Lindsay could wind up sharing the workload in more of an even 50/50 split, at least to begin the season, but Freeman is well behind as the third option in this backfield. That won't give him much fantasy appeal in shallow leagues, but he would be a waiver wire pickup if one of Gordon or Lindsay were to get hurt. The former third-round pick has been average in his two seasons in Denver, posting 3.9 yards per carry on 262 attempts. Freeman is off the fantasy radar for starting lineups to begin the 2020 season.

Denver Broncos running back Royce Freeman's role as the No. 3 back behind Melvin Gordon III and Phillip Lindsay isn't secure heading into training camp, in the opinion of The Denver Post's Ryan O'Halloran. If that's the case, he'll be competing with the likes of Khalfani Muhammad and undrafted rookie Levante Bellamy. That's a big fall for the third-round pick in 2018, who was the primary complement to Lindsay each of the last two seasons. Although he did see a big increase in receptions (43) last year, Freeman remained mediocre on the ground with 3.8 yards per carry on 132 attempts. The 24-year-old won't have any appeal in most fantasy leagues unless one of Gordon or Lindsay is injured this season.

Denver Broncos RB Royce Freeman hauled in 43 of his 50 targets last season. The resulting 86-percent catch rate ranked third in the league among all running backs with at least 40 targets, according to Sports Info Solutions.

Denver Broncos RB Royce Freeman accounted for 32.3 percent of the carries in 2019 and 33 percent in 2018, and he 'appears to be the odd man out' of the running back rotation in 2020 following the addition of RB Melvin Gordon, according to Jeff Legwold of ESPN.com.

Fantasy Spin: Freeman was already playing second fiddle to Phillip Lindsay, and with Gordon expected to lead the backfield, it pushes Freeman even further down the pecking order. Gordon owners should target Lindsay as an insurance policy, but Freeman can be left on waivers outside of deeper leagues.