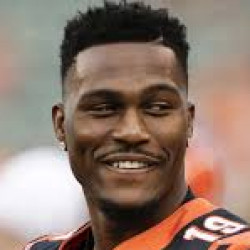 Cincinnati Bengals wide receiver Auden Tate (knee) was placed on the injured reserve Tuesday, ending his season. Tate sustained a mild MCL sprain in his left knee in the third quarter of the teams Week 14 loss to the Cleveland Browns. Damion Willis was promoted to the active roster in a corresponding roster move. Tate took advantage of all the injuries to the Bengals receiving corps this season, racking up a career-high 40 catches for 575 yards and one touchdown, and is a worthy hold in dynasty leagues heading into his third season.

Cincinnati Bengals WR Auden Tate (knee) was placed on the Reserve/Injured list with a sprained left medial collateral ligament Tuesday, Dec. 10. WR Damion Willis was elevated from the practice squad to replace him on the roster.

Fantasy Spin: Tate's emergence was probably the best thing to happen to the Bengals in an otherwise lost season. Assuming A.J. Green re-signs with the team in the offseason, Tate will probably push John Ross for the other starting outside job while Tyler Boyd remains the main slot receiver. Tate, who finishes this season with 40 catches for 575 yards and a touchdown, should be considered a solid late-round flier next summer in fantasy drafts.

Updating a previous report, Cincinnati Bengals WR Auden Tate (knee) was diagnosed with a sprained medial collateral ligament in his left knee after an MRI on Monday, Dec.9, showed no structural damage, according to ESPN's Ben Baby.

Fantasy Spin: It most likely means he's out for Week 15 and perhaps the rest of the season. Owners can wait for further confirmation if they want, but he can be dropped in most leagues. Alex Erickson figures to see a few more snaps and targets in his absence, although it's unlikely he'll be worth using in fantasy the rest of the way.

Cincinnati Bengals wide receiver Auden Tate was forced to exit Sunday's loss to the Browns with an apparent knee injury. After recording his first and only catch of the game, the 22-year-old limped his way back to the locker room after initially being evaluated in the medical tent. Tate has been a semi-regular target for the team this year, logging 39 catches for 559 yards and a touchdown on 76 targets. While he wasn't a consistent source of production, he does have value in deeper leagues. Look for an update regarding his status for the Week 15 encounter with the Patriots, but if he is out, look for the recently-returned John Ross to serve as the primary beneficiary.

Cincinnati Bengals WR Auden Tate (knee) suffered a knee injury during the Week 14 game and is considered doubtful to return.

Fantasy Spin: Fantasy players will need to keep an eye on the situation to see the severity of Tate's injury. Tyler Boyd is the only Bengals receivers that should be a starting option in fantasy leagues if Tate misses an extended period of time.

Cincinnati Bengals wide receiver Auden Tate was forced to leave Sunday's game against the Cleveland Browns with an apparent ankle injury. Tate went down awkwardly on his ankle in the third quarter after making a catch, and while he was able to walk off the field under his own power, he was soon after walking to the locker room with his gloves and helmet off. There has been no official announcement yet, but Tate looked doubtful to return at best. Before getting hurt, he made one catch for 16 yards on four targets.

Cincinnati Bengals WR Auden Tate finished with four receptions for a team-high 66 yards in Week 13 against the New York Jets on seven targets.

Fantasy Spin: Tate was able to bounce back after his one-catch performance last week against the Steelers. While his 66 yards were his most since Oct. 13 in Baltimore when he had a season-high 91 yards, he remains more of a WR6 in most fantasy leagues. He hasn't scored in seven games since Oct. 6 against Arizona.

Cincinnati Bengals wide receiver Auden Tate finished with four receptions for 66 yards during the win over the Jets on Sunday. Tate was targeted seven times by the returning Andy Dalton, and has now had at least six in nine games this season. Look for him to continue to serve as the No. 2 receiving option behind Tyler Boyd in Week 14 against Cleveland as long as A.J. Green (foot) stays out of the lineup.

Cincinnati Bengals WR Auden Tate had one grab for 10 yards in Week 12 against the Pittsburgh Steelers on three targets.

Fantasy Spin: Tate was coming back from a concussion and a cervical strain, so it was miraculous he was able to play at all. Still, he is only worth a look in the very deepest of fantasy formats at this point. The Bengals host the Jets in Week 13.

Fantasy Spin: Tate was taken off on as stretcher after a scary-looking injury Sunday in Oakland, and while it was good to see his status upgrade Friday, he still looks to be on the wrong side of questionable for Week 12. Fantasy GMs will need to check Cincy's pre-game inactives list Sunday to be sure, but plan on going with another option for now.

Cincinnati Bengals WR A.J. Green (ankle) and TE Drew Sample (ankle) did not practice all week and have been ruled out for Week 12 against the Pittsburgh Steelers. WR Stanley Morgan (illness) also did not practice all week, while WR Auden Tate (concussion) was upgraded to a limited practice Friday, Nov. 22; both players are listed as questionable. OG Alex Redmond (ankle, knee), S Shawn Williams (thumb), C Billy Price (back), DT Geno Atkins (rest), CB Darqueze Dennard (rest) and TE Tyler Eifert (rest) practiced in full Friday and have been removed from the injury report.

Fantasy Spin: Tate will need to pass the concussion tests before he is allowed to play, so his status for Week 12 is uncertain. He has posted at least 55 yards in four of the last five games, but fantasy players may want to look for other players because of uncertain status.

Cincinnati Bengals head coach Zac Taylor said that wide receiver Auden Tate (concussion, back) is in the league's concussion protocol after leaving on a cart in Week 12 against the Raiders. Tate is also dealing with a cervical strain. He contributed four catches for 56 yards before departing, and his status is very much up in the air for Week 12 against the Steelers. Even if Tate is able to play, he's one to fade in this weak passing offense led by rookie quarterback Ryan Finley. Assuming A.J. Green (ankle) remains out, Cincy's three-wide sets could include Tyler Boyd, Alex Erickson and either rookies Damion Willis or Stanley Morgan Jr.

Cincinnati Bengals WR Auden Tate (undisclosed) hauled in four of his six targets for 56 yards - all team highs - before leaving with an undisclosed injury in Week 11 versus the Oakland Raiders.

Fantasy Spin: Tate was removed from the game on a stretcher in the fourth quarter after taking a shot to the head and/or neck area, but he tweeted a few hours later that he was "good. It remains to be seen whether or not he'll be able to make it back in time for Week 12, but he'd be a low-upside start in fantasy against the Pittsburgh Steelers - especially with Ryan Finley as his quarterback.

Cincinnati Bengals wide receiver Auden Tate led the Bengals in receiving in Week 11, catching four of his six targets for 56 yards. Tate has now topped 50 receiving yards in four of his past five games. Tate was fortunate that his line ended up decent on a day where quarterback Ryan Finley completed just 13-of-31 passes for 115 yards. No other Bengal had more than 21 receiving yards. Tate is a viable WR3 or flex option most weeks and is worth rostering in all leagues of 12 or more teams.

Cincinnati Bengals WR Auden Tate (undisclosed) suffered either a back or neck injury in the second half of the Week 11 game against the Oakland Raiders. He was down for several moments before being placed on a stabilizing board to be carted off.

Fantasy Spin: It is always a scary scene when a player is taken off in such a way, but hopefully it was all due to precaution. More on Tate's status when we know it.

Cincinnati Bengals wide receiver Auden Tate looks to bounce back against the Raiders in Week 11. Tate was only targeted six times in Week 10 during the loss to the Ravens after getting 13 against the Rams in Week 8. Joe Mixon was partially to blame for Tate's lack of attention against Baltimore as he received a season-high 30 carries for 114 yards. The 22-year-old has a relatively high ceiling from week-to-week, but should only dispatched in deeper formats against Oakland on Sunday.

Cincinnati Bengals wide receiver Auden Tate recorded three receptions for 36 yards during the loss to Baltimore on Sunday. Tate received the second-most looks (six) from quarterback Ryan Finley, who was making the first start of his career. While it was encouraging that the 22-year-old was still semi-involved, it was a step in the wrong direction after averaging 10 targets in his previous three outings coming into this one. Tate is still an acceptable streaming option moving forward, but mostly in deeper formats, at least until he builds a better rapport with Finley.