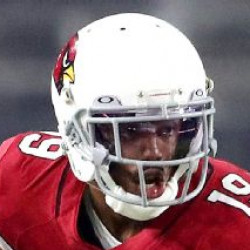 Johnson was a healthy scratch several games but did play 10 games his rookie year, catching 21 passes for 187 yards and a touchdown. He has a lot to compete with for targets this year in Arizona and is likely No. 4 or 5 on the depth chart. Johnson is very good at getting in and out of his breaks. He runs solid routes and can makes plays after the catch. He has just so-so hands, though, and lacks a little athleticism.

FANTASY OUTLOOK: The Cardinals have a lot of quality options at receiver, so Johnson is going to have a hard time finding the field much. He might not even match last year's production. Expect around 15 catches for 150 yards with a score.

Arizona Cardinals wide receiver KeeSean Johnson's offensive snaps could take a hit in his second season with the addition of DeAndre Hopkins to the receivers room. The sixth-round pick in 2019 finished the season with five straight inactives, but he had a great preseason and has a bright future. Johnson finished his rookie season with only 21 catches for 187 yards and a touchdown. He can certainly learn a ton from both Larry Fitzgerald and Hopkins in 2020 as he continues to develop, but it's hard to picture him taking a huge second-year leap now that Hopkins is in the fold. For now, Johnson is strictly a hold in dynasty/keeper formats.