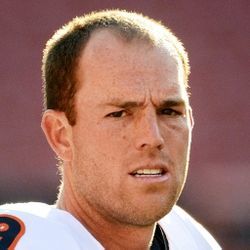 Gould had some injury issues last year and struggled with is accuracy some, which was out of the norm for him. He did not make a field goal of 50-plus yards. His field goal percentage of 74.2 was a career low for Gould. He did score 110 points, though, having at least 110 points all three seasons with the 49ers. He will continue to start for the 49ers and get plenty of chances in this offense. Gould is 37 years old but has not shown many signs of slowing down just yet. Gould doesn't have a booming leg, but is a very accurate kicker. He has produced some top seasons throughout his career.

FANTASY OUTLOOK: Gould is a legit top-10 fantasy kicker in an offense that should provide a lot of chances for him. He can rebound from last year and get around 130 points, providing consistent weekly numbers.

San Francisco 49ers kicker Robbie Gould will begin his fourth season with the team in 2020. The 37-year-old, who is on the downhill slope toward two decades of service, signed a four-year deal with the club in the summer of 2019 after finishing the previous year as one of the most accurate kickers in the league. However, he struggled at times, finishing the regular season with a career-low 74.2 field goal percentage in addition to dealing with a quad injury that cost him three games. While he was able to nail all seven of his kicks during the postseason, with two of them occurring during the Super Bowl loss to the Chiefs, his rocky campaign overall should raise a few red flags moving ahead.

San Francisco 49ers kicker Robbie Gould hit all three of his field goal attempts in Week 15 against the Falcons. Two of his attempts in the game were from over 40 yards. Unfortunately, he only converted one of his two extra-point attempts. Gould is now 19-for-27 on field goal attempts this year. He's a solid low-end starting kicker option as the 49ers provide him a decent amount of kicking opportunities.

San Francisco 49ers kicker Robbie Gould knocked in two field goals and six extra points in Week 14 against the New Orleans Saints. The Niners offense was on fire with 48 points on Sunday and Gould benefited, punching in all his opportunities. Gould played the hero in the waning seconds with a walk-off 30-yard field goal to clinch the victory for the road Niners. Back from his lengthy quadriceps injury, Gould is a fine kicking option down the fantasy stretch.